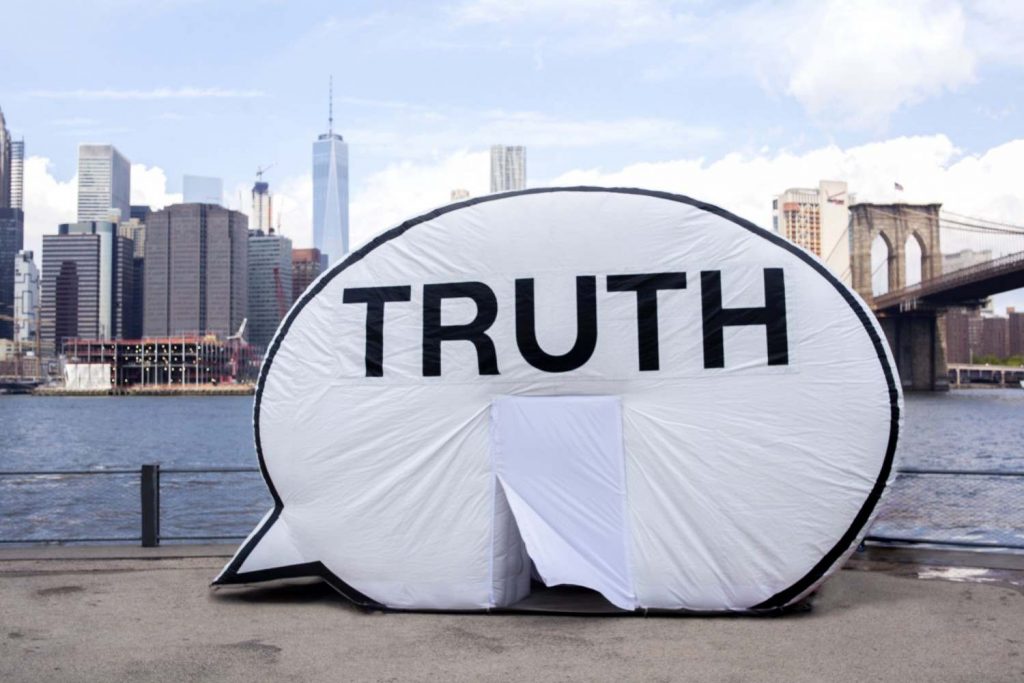 The Truth Booth — a giant, inflatable, portable enclosure in the shape of a thought bubble — will make its way across Detroit and Flint over the next two weeks.

The cartoonish pop-up bubble is a participatory public art installation that functions as a video recording studio. Visitors are invited inside an intimate white space to give semi-anonymous testimonial in two minutes or less. The only directions are to complete the simple thought, “The truth is…”

But defining the truth is not always so simple. And that’s the point of this layered, inclusive project.

“In Search of the Truth (The Truth Booth)” was created by the artist-driven Cause Collective and has grown in physical size and scope since it embarked on a world tour at the Galway Arts Festival in Ireland in 2011.

The Truth Booth takes the contemporary concept of social sharing and makes it a private and personal matter staged outside of the public gaze. A camera records participants, who appear in sharp contrast to the soft, white space in the background. In their confessions, some people focus on defining the nature of human truths, while others confess their deepest concerns or daily struggles. The truth is poignant and shaped by current events, the environment and perhaps most important, the identity of the individuals who share their reflections.

“The project is about hearing the voices of those who are underrepresented,” says Hank Willis Thomas, one of the four artists that conceived the idea, along with Ryan Alexiev, Jim Ricks and Will Sylvester. “We live in a society that is primarily celebrity-oriented. This is a project that is democratized. Everyone is anonymous. I realize in that context you can learn so much from so many people. Seeing someone as young 8 and someone as old as 80 has been powerful.”

Thomas, a New York-based conceptual artist, has worked on several projects that incorporate social justice and collaboration. He also recently cofounded “For Freedoms,” an artist-initiated Super PAC, that aims to create dialogue and awareness about the political process through art, and another video project, “The Question Bridge,” which has built a stream of dialogue among African-American men across America.

The Truth Booth has already traveled to a range of contrasting regions — from South Africa to Afghanistan to New York City. The concept was inspired by Nelson Mandela’s words in the book “Long Walk to Freedom” when he said, “The truth is we are not yet free; we have merely achieved the freedom to be free, the right not to be oppressed.”

The Cause Collective artists, who live in a variety of cities, have set the goal to visit all 50 states before the November election. “Time has grown into the Truth Booth,” Sylvester says. “With the technology we were using before, and the idea of touring this project five years ago, it was the thing we thought it needed to happen.” The metro Detroit visit will be the most comprehensive and longest stop on the tour.

Thomas and Sylvester traveled to Detroit in March to begin planning how the Truth Booth would be received across varying diverse communities, a key component of their vision. “The project is created and crafted by the people who go in there. It would be a disservice to not bring it back to the places we visit,” Sylvester says.

The Detroit connection is strong for the Cause Collective. Curator Laura Mott wrote the initial grant in 2008 that helped launch the Truth Booth in 2008. Mott, who is the curator of contemporary art and design at Cranbrook Art Museum, also led Nick Cave’s heralded public performances and exhibit at Cranbrook last year, and says that the Truth Booth has a similar premise of engaging the community.

“A lot has changed since the first idea of a Truth Booth,” Mott says, referencing the growth of social-media mainstays like selfies. “It really is able to take a temperature of place and time through people’s voice. People are used to a confessional style, and it’s understanding you are a part of something so much bigger, and you’re part of a global narrative.”

The Truth Booth will kick off Sunday at the Cranbrook Art Museum and over the next two weeks will travel to 11 other locations across the Detroit and Flint area, including the Detroit Institute of Arts, the Sidewalk Festival for the Performing Arts, the Arab American National Museum and the Hasselbring Park Senior Center in Flint, before concluding in Clark Park in southwest Detroit on Aug. 13.

The material gathered will feed into a larger narrative being constructed around the Truth Booth, which will later be posted in short films on the organization’s website and soon-to-arrive YouTube channel. In November, Cranbrook Art Museum will present the first major exhibition of the Truth Booth, exploring the results of the Michigan testimonials, while serving as a blueprint for subsequent shows. The November exhibit will feature a 60-foot-wide video installation that focuses on Detroiters’ recordings. The project is partially funded by the John S. and James L. Knight Foundation and is part of the organization’s initiative to bring impactful public projects into the city. Eventually, the aim is to take the results of the Truth Booth tour back to Detroit neighborhoods, Sylvester said.

Over the past five years, the artists have learned much from what thousands of people have shared from the Truth Booth bubble.

“We’ve been trained to judge books by their covers,” Thomas says. “This disarms you and you really can’t tell by looking at someone at how what they are going to say is going to affect you. It’s opened my mind to the reality of the truth. They are amazing and willing to be vulnerable and general. It’s about exposing yourself to people you never meet.”

In Search of the Truth (The Truth Booth)

Here are planned stops for the Truth Booth.

Access is on a walk-up basis, and it’s free to participate. Participants don’t need to give their names, but it’s possible their faces could be seen in Truth Booth videos.

The Cranbrook exhibition will run Nov. 19-March 19. Free tickets to the show will be given out at all of the August tour stops. 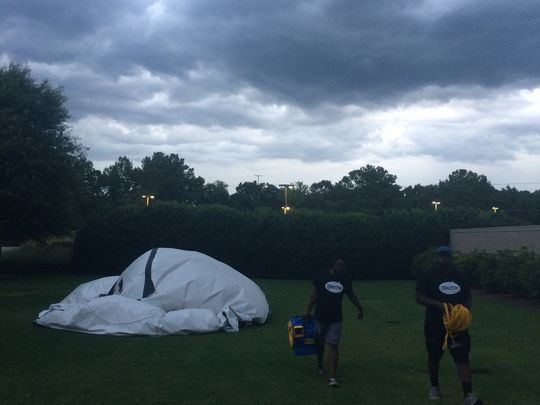