Ryan Alexiev, Hank Willis Thomas, and Jim Ricks with The Truth Booth on its first trip, to Ireland. Photo: Courtesy Cause Collective
July 27, 2016

by Marge Sorge, Detroit Unspun and The Hub

Has anyone asked you?

Well, the Cranbrook Art Museum is going to.

It’s all part of its new art project – In Search of the Truth. It is part of a long-term Cause Collective project by the same name, which began in 2011.

Starting this Sunday, July 31, the museum will bring The Truth Booth to 12 locations throughout metro Detroit, Dearborn and Flint. This Sunday’s will be from 11:00 a.m. – 5:00 p.m. at the museum as part of its Family Day Celebration.

The Truth Booth is a portable, inflatable video recording studio in the shape of a giant speech bubble. It has the equipment needed to compile your video responses and those of hundreds of people from different cultural backgrounds as they complete the sentence: “The Truth Is …”

The booth has been on a worldwide tour, which started in Ireland five years ago.

Each participant will have up to two minutes to record his or her statement. The results will be used to create an ambitious 60-foot-wide video installation that will open as part of an exhibition about the project at Cranbrook Art Museum in November of 2016.

The Cause Collective project was created by artists Ryan Alexiev, Jim Ricks, Will Sylvester and Hank Willis Thomas.

“The Truth Booth tour of Detroit and Flint this summer is going to create a unique opportunity to take the pulse of the country during a historic year. The current level of political and social turmoil hasn’t been seen in this country in a long time,” says Thomas. “The tour will allow us to address deep issues in American society while also inspiring engagement through the cathartic process of recording testimonials. We hope to reach voices and faces that are often suppressed or ignored.”

Cause Collective is currently touring the booth around the country, with the hope of visiting all 50 states by Election Day. The stop in Michigan is the longest and most in-depth stop on the tour. The goal is to create conversations among residents who live in the same geographic region, and expand the collective understanding of how a city defines what is real, authentic, valuable or true.

“What is brilliant about the pop-up The Truth Booth is that it allows the recording studio to go deep into our neighborhoods,”says Laura Mott, curator of contemporary art and design at Cranbrook Art Museum and curator of this project.

“By expanding the tour beyond metro Detroit to include the Flint area, we are giving individuals a rare opportunity to sincerely speak and be heard amongst the chaos of today’s political shouting matches. The truths presented in the exhibition will resonate not only during this historic election year, but will continue to be compelling 100 years from now,” she says.

When he was planning the project, Sylvester spent time in the neighborhoods and with the residents of Detroit and Flint. “It’s an honor and a pleasure to facilitate a project that can be a platform for these communities to tell their stories in their own voices, and speak their truth to the world,” he says.

Over the next two weeks the bubble will travel to 11 locations. Here is the tour schedule. Please find time to tell them the truth.

The project is funded in part through a $60,000 matching grant from the John S. and James L. Knight Foundation, through their Knight Arts Challenge Detroit initiative, which looks to fund ideas that engage and enrich Detroit through the arts.

“The truth is that few things bring people together like the arts, with the potential to foster a mutual understanding that connects us to our neighbors and neighborhoods,” said Victoria Rogers, vice president for the arts at the Knight Foundation. “With The Truth Booth as their platform, we’re excited to hear what’s on Detroiters’ minds.”

The Presenting Sponsor of In Search of the Truth (The Truth Booth) is the Knight Foundation. Leadership sponsors include The Applebaum Family Compass Fund, the National Endowment for the Arts, and Maryanne Mott, who is providing support for The Truth Booth in Flint. Additional support provided by Emily Camiener and Marc Schwartz, Lynn and Bharat Gandhi and Lila Silverman. 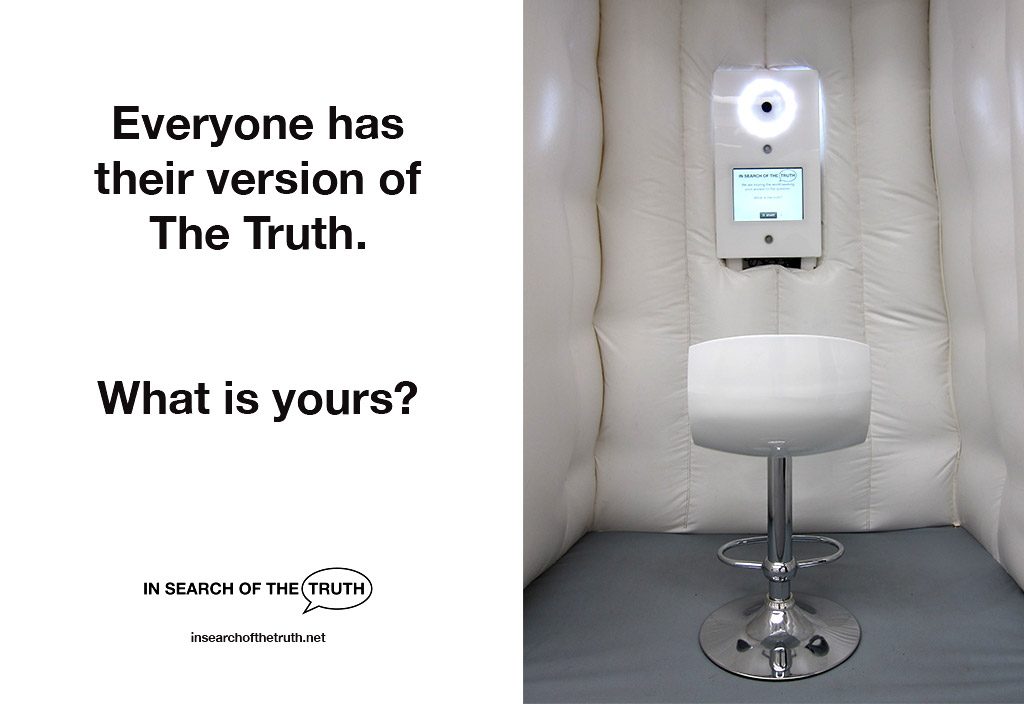 Source: Detroit Unspun and The Hub