Tell it on Tape: Share What ‘The Truth Is’ on Video at DIA Today | Deadline Detroit 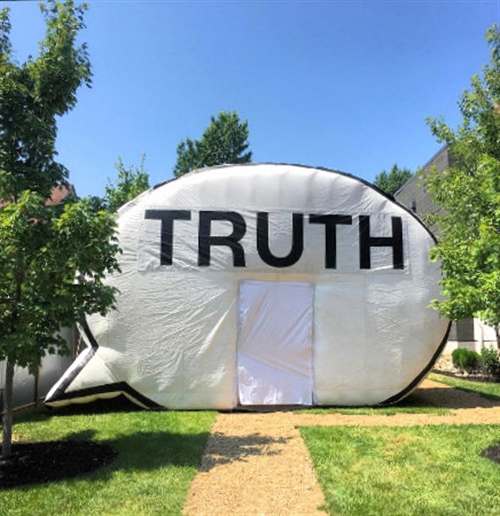 The videotaping booth in Cleveland two weeks ago. Courtesy of Cause Collective.
July 31, 2016

The inflatable “Truth Booth,” which looks like an oversize cartoon speech bubble, is a portable video studio being used to record personal statements during a global tour now in its fifth year.

The stark white isolation chamber was in Philadelphia during the Democratic convention and in Cleveland when Republicans gathered a week earlier. Now it starts a two-week tour of Metro Detroit and Flint.

Anyone can be taped privately finishing this sentence: “The truth is . . .” Each person can speak for up to two minutes. There’s no cost and reservations aren’t needed.

On Tuesday, the booth will be on the Woodward Plaza of the Detroit Institute of Arts from 9 a.m. to 4 p.m., followed by a Wednesday stop at Dearborn’s Arab American National Museum from 10 a.m. to 6 p.m.

Six other Detroit stops, listed at the end of this article, are scheduled Aug. 4-9 and Aug. 13.

“In Search of the Truth (The Truth Booth)” was created by the artist-driven Cause Collective and has grown in physical size and scope since it embarked on a world tour at the Galway Arts Festival in Ireland in 2011.

The Truth Booth takes the contemporary concept of social sharing and makes it a private and personal matter staged outside of the public gaze. A camera records participants, who appear in sharp contrast to the soft, white space in the background.

In their confessions, some people focus on defining the nature of human truths, while others confess their deepest concerns or daily struggles. The truth is poignant and shaped by current events, the environment and perhaps most important, the identity of the individuals who share their reflections. . . .
The concept was inspired by Nelson Mandela’s words in the book “Long Walk to Freedom” when he said, “The truth is we are not yet free; we have merely achieved the freedom to be free, the right not to be oppressed.”

The 12 Metro Detroit and Flint dates are the booth’s longest stay in one region during a U.S. tour leading up to Novembers election.

Warren speaks with Laura Mott, curator of contemporary art and design at Cranbrook:

“A lot has changed since the first idea of a Truth Booth,” Mott says, referencing the growth of social-media mainstays like selfies. “It really is able to take a temperature of place and time through people’s voices.

“People are used to a confessional style, and it’s understanding you are a part of something so much bigger, and you’re part of a global narrative.” . . .

In November, Cranbrook Art Museum will present the first major exhibition of the Truth Booth, exploring the results of the Michigan testimonials, while serving as a blueprint for subsequent shows. The [four-month] exhibit will feature a 60-foot-wide video installation that focuses on Detroiters’ recordings.

“The Truth Booth is an opportunity to create conversations among residents who inhabit the same geographic region,” Cranbrook’s museum posts at an exhibition preview page, “and expand our collective understanding of how the city defines what is real, authentic, valuable or true.”

“We live in a society that is primarily celebrity-oriented. This is a project that is democratized. Everyone is anonymous. . . . In that context, you can learn so much from so many people.

”It’s opened my mind to the reality of the truth. They are amazing and willing to be vulnerable and general. It’s about exposing yourself to people you never meet.”

Eventually, selected videos will be edited into short films to go on the project’s website and a planned YouTube channel.