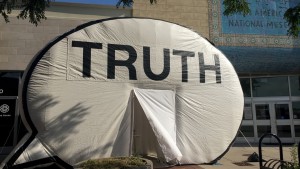 Photo by Zeinab Najm. The Truth Booth art installation sits outside the Arab American National Museum, 13624 Michigan Ave., Aug. 3 where it served as an outlet for anyone willing to share their personal truth.
August 7, 2016

Curious visitors arrived at the Arab American National Museum to share their truth in the Truth Booth art installation Aug. 3.

The portable, inflatable booth shaped similar to a cartoon speech bubble with the word “truth” on the outside served as a video recording studio for anyone willing to participate.

A project of the Cause Collective, the installation will be traveling to 11 locations in Michigan through Aug. 13 with the hope to reach every state by November.

Artists Ryan Alexiev and Jims Ricks founded the booth as a way to give all Americans the ability to speak their minds openly and freely on all issues.

“The Cranbrook Art Museum suggested that this museum would be a good location for the truth,” Project Coordinator Sami Giarratani said. “There has been a lot of interest from all type of people who passed by the booth.”

During its eight hours set up behind the AANM, 13624 Michigan Ave., about 30 people recorded their truth on various topics including race, religion and social issues.

They each had a two-minute time limit.

“We are in the constant quest of truth,” Giarratani said, “so we were trying to get people to talk and express their views.”

The final project will make its debut at the Cranbrook Art Museum in November where all participants receive free admission to the premiere.
“We plan to take all the videos recorded from all locations and curate them into one big video installation,” Giarratani said.