Since July 31, the Detroit metro area has been visited by “The Truth Booth,” an ongoing interactive project conceived by Cause Collective, and brought for a two-week intensive visit to Michigan by a $60,000 Knight Arts Challenge grant awarded to the Cranbrook Art Museum. Laura Mott, curator of contemporary art and design at Cranbrook, worked previously with artist Hank Willis Thomas and Cause Collective’s Ryan Alexiev to help get the project on its feet, nearly eight years ago.

“We had done a show with Ryan at Mission 17, where I was working,” Mott said. “I met Hank [Willis Thomas] through that. And they were working together already in Cause Collective–‘The Truth Booth’ was an idea they had that was sort of on paper, and I wrote a grant to get funding to build it. And then I moved to Sweden! So I essentially sourced them some seed money to build the prototype.”

Fast-forward eight years, and Mott is finally getting to see the vision she helped seed in action. “The Knight [Arts Challenge] is interesting,” she said. “It’s a challenge in terms of the money, but it’s also a challenge in terms of what’s an interesting public project for this context.” For Mott, the timing and the location of “The Truth Booth” could not be more exciting. “To me, ‘The Truth Booth’ in this year in the city of Detroit, when there’s so much conversation and very little opportunity for individuals to be heard, it seems kind of perfect. So it’s on its own correct karmic timeline, in terms of coming together as a project.”

The project itself has required intensive organization and effort to reach out to a number of different host locations. Wherever it goes, the booth serves the same function–offering an open opportunity for any passerby to step into the recording chamber and video record a statement of up to two minutes, beginning with the prompt, “The truth is…” The project has been extremely high-profile, even touring internationally, and this visit to Michigan is the most lengthy stop on what has been a nationwide tour for the better part of 2016.

Mott and Cause Collective anticipate recording at least 2,000 video testimonials in Michigan alone, which will form the basis for an exhibition at Cranbrook (opening Nov. 19 and running through March 17, 2017), called “The Truth Is I Hear You.” Previous Cause Collective films arrange “Brady Bunch”-style grids of individuals speaking, with certain sections brought to the forefront, offering a range of submissions and showcasing what they sound like taken en masse, as well as highlighting moments that may be very personal and individual. Ultimately, the power of the Cranbrook show will be determined by the nature of the myriad truths shared by Metro Detroiters and residents of Flint, Michigan, where the booth is also traveling.

“We started the conversation about [‘The Truth Booth’] coming to Detroit, and then the water crisis happened in Flint,” Mott explained. “Coincidentally, it was the day Hank and [Cause Collective member and ‘Truth Booth’ tour manager] Will Sylvester–I picked them up from the airport. They get in the car, and I was like, ‘You know what, guys? I think ‘The Truth Booth’ has to go to Flint.’ And they’re like, ‘We just said the same thing.’”

“The Truth Booth” at the Sidewalk Festival. Video produced by The Right Brothers.

Detroiters had many occasions to drop in on “The Truth Booth,” as it made the rounds to various locations–including several Knight Arts grantees, such as The Arab American National Museum, the Sidewalk Festival of Performing Arts, and the Banglatown neighborhood that is home to Bangla School of Music, Burnside Farm Detroit and The Hinterlands theater troupe. The final stop took place at Clark Park on Saturday, Aug. 13, after “The Truth Booth” returned from its visit to Flint.

In each location, the “Truth Booth” crew made a concerted effort to connect with the host community. “We did extensive tours of locations, we had personal conversations, we did a lot of research,” said Mott. “We held a community meeting with about 30 individuals, to talk through our ideas about where the booth should go and get some feedback, which was really interesting. We had some really important voices which were a part of guiding what makes sense for this tour.”

In each location, a slightly different contingent of Metro Detroit has turned up to speak their truth–but the nature of truth seems to vary wildly from individual to individual. “Truth is just sort of subjective,” said Will Sylvester, who has accompanied “The Truth Booth” all around the country this year, and made several trips to Detroit to scout for prime locations. “I think what’s going to be interesting for me is getting a picture of the many different parts of Detroit, and then being able to take those pictures and show them to the many parts of Detroit.”

Indeed, facing down the prospect of entering a space designated as a place of truth-telling, one begins to question what can be presented as fundamentally true. Some “Truth Booth” visitors arrive with prepared statements; one woman, who attended the opening day at Cranbrook, made more than a dozen separate recordings of truths she had prepared in advance. Others come with a more targeted vision; a woman showed up with two friends in tow at the Arab American National Museum, ready to speak in the “Truth Booth” about an issue she has been struggling with in her personal life. Her friends waited patiently, but had no interest in sharing their truths with the project. “We just had lunch,” one of them said. “I like to talk to my friends over lunch about things I’m dealing with. Why would I go talk to a camera?”

Still others decline the invitation to engage with the booth initially, but sometimes return, having collected their thoughts and arrived at a point that they deem worth sharing. Across the boards, people seem to take the concept of truth very seriously, although the project does not specify any degree of severity to the truths it is eliciting. “The sky is blue today,” might be a true enough statement, but visitors to the booth seem to regard this as an opportunity to speak capital-T Truth, or perhaps to share secret truths–many visitors, especially those skeptical about participating, liken the experience to a confessional.

“People have these mixed reactions going into the booth,” said Sylvester. “People see it as a confessional, most of the time–but I also like to think of it as a soapbox, or some people have called it a therapist. It sort of gives you the space to be open and honest… it’s a space that you can say and be anyone, or say anything. For me, giving people the opportunity to do that is a goal and an importance of the project. We don’t get that opportunity very much in life.”

This seemed to be a constant refrain among the projects organizers and attendees, and is a perspective that very much caught my notice. I am perhaps somewhat infamously straightforward, in terms of saying what is on my mind, regardless of context. It is somewhat disheartening for me to realize that most people live in a state of half-truth, self-censoring or outright lies–and that this climate of dishonesty is what passes for society. Do we need to be rigorously honest in all things? Perhaps not. But when an opportunity to say something true is held up as a special occasion, I have to wonder if we, as a society, have collectively slipped into a state of denial and false affirmation–and how that begins to manifest in social illnesses, corrupt politics, ill health and interpersonal discord.

If, as its champions assert, “The Truth Booth” offers people a rare opportunity to be open with themselves, then it is already doing a great service in its process. Whether the project yields powerful results will, of course, be determined by the exhibition when it opens at Cranbrook in November. I had to wonder if planning for an exhibition that relies so heavily on the participation of the community was a point of stress for the “Truth Booth” crew.

“The Truth Booth” in Banglatown. Video produced by The Right Brothers.

Mott also has high hopes that “The Truth Booth” will gather an image of Detroit and Flint, and reflect it back. “As a city, we’re desperately in need of listening to each other. If that’s what this can do, that’s great,” she said. 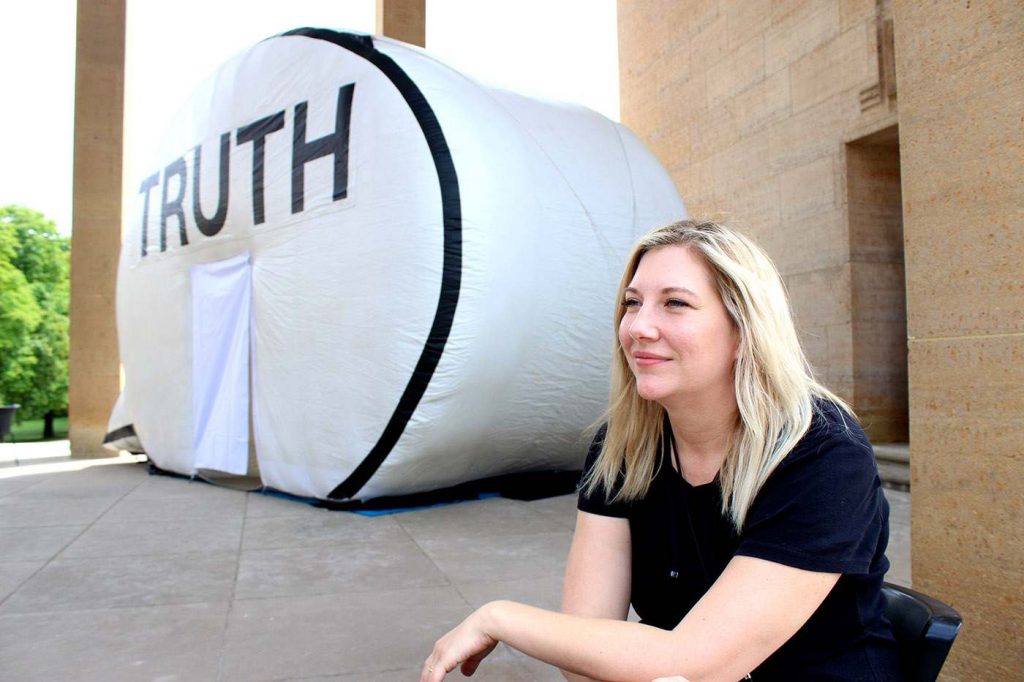 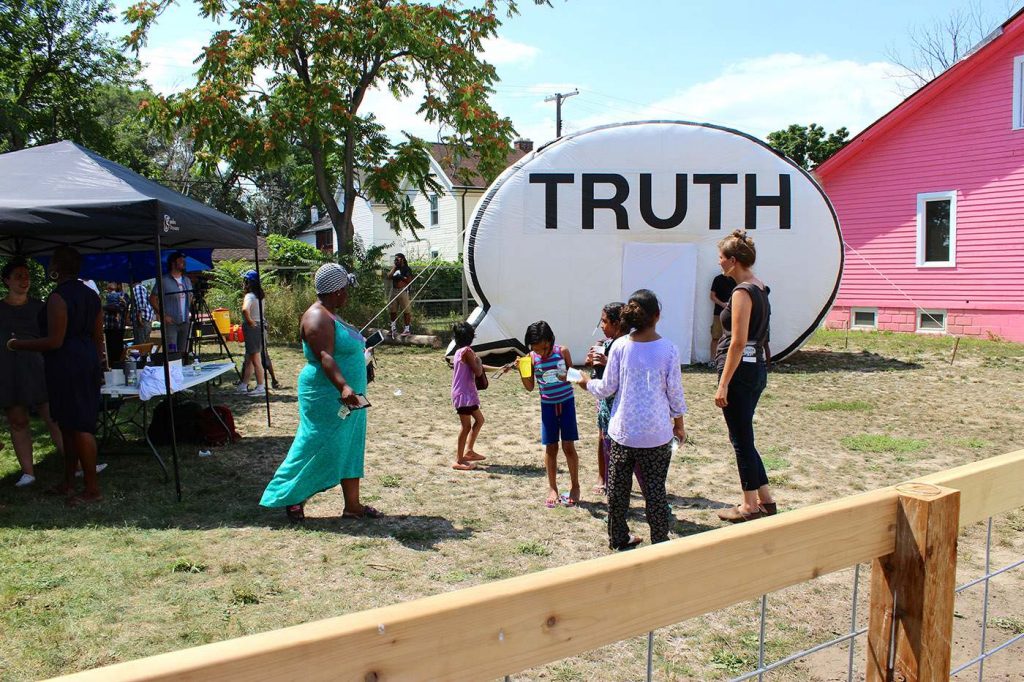 “The Truth Booth” in Detroit's Banglatown. Photo by Rosie Sharp. 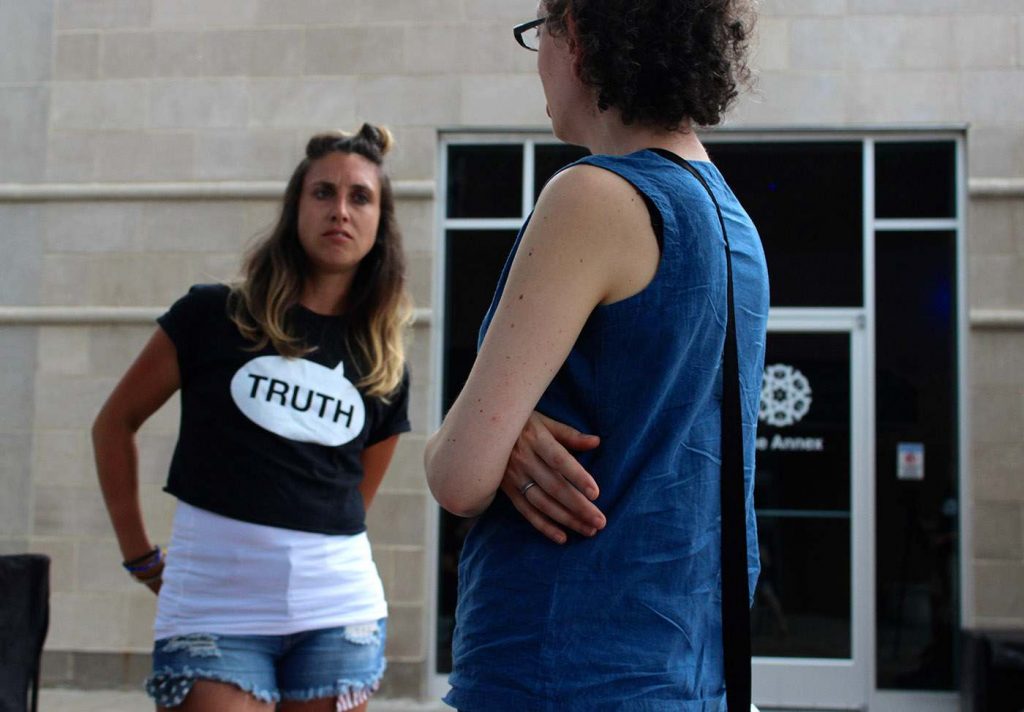 “The Truth Booth” at the Arab American National Museum. Photo by Rosie Sharp.