All Shall Be Revealed | HOUR Detroit 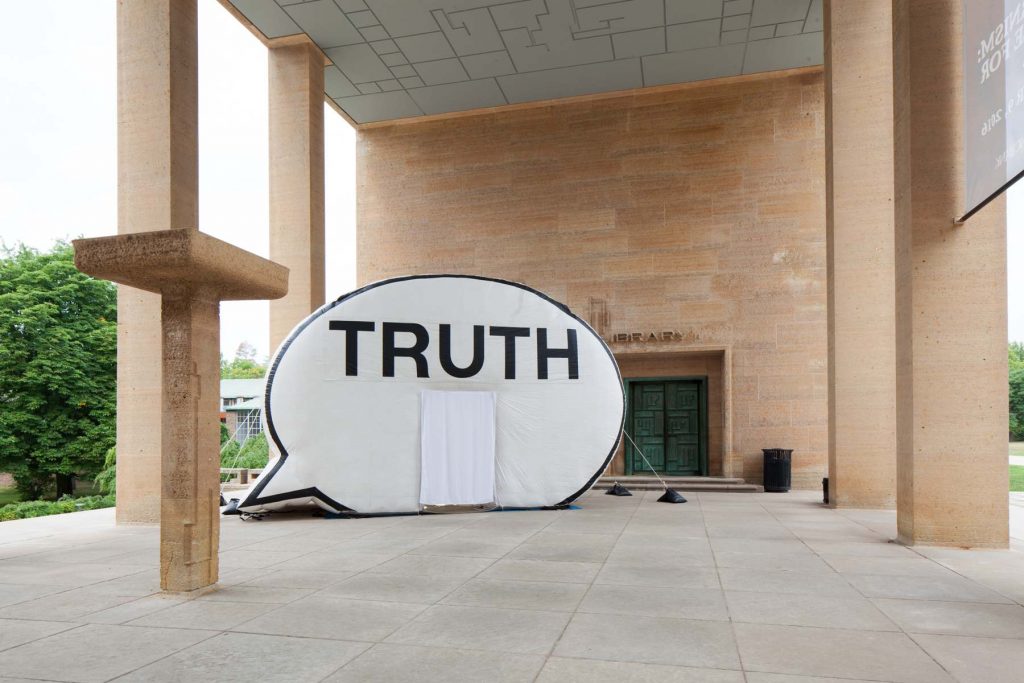 Most of us were probably told as children that honesty is the best policy. But entry into the adult world often carries with it a more nuanced View. To hear the participants of the In Search of the Truth (The Truth Booth) project tell it, having an opportunity to speak one’s truth is actually a rare event.

The Truth Booth — a portable, inflatable, and interactive sculpture created by Cause Collective artists Ryan Alexiev, Jim Ricks, Will Sylvester, and Hank Willis Thomas — began its international tour in Ireland in 2011. It stopped in Michigan for two weeks in July and August during a tour that included both political party conventions and all 50 states.

Now, results of the Michigan visit will be presented in an exhibit called The Truth Is I Hear You. It opens at the Cranbrook Art Museum on Nov. 19. The exhibit — a 6o-foot-wide video installation accompanied by photographs documenting Truth Booth tour locations — will deal directly with some 1,200 recordings made by metro Detroiters and residents of Flint, collected at various locations throughout the city and outlying communities.

Recordings were made at Cranbrook, the Detroit Institute of Arts, and the Arab American National Museum in Dearborn. Community events such as the Sidewalk Festival for Performing Arts in Old Redford and a “For the Love of Osborn” neighborhood parade were also included, as were the Heidelberg Project and the Hamtramck-Detroit neighborhood of Banglatown. Locations in Flint included the Hispanic Technology and Community Center of Greater Flint, the Hasselbring Senior Center, and the Mott-Warsh Collections MW Gallery.

Wherever The Truth Booth goes, the format remains the same: Participants are encouraged to enter a chamber in the sculpture — which resembles a giant cartoon word bubble saying “TRUTH” — and record up to two minutes of their own response to the prompt, “The truth is…” Submissions are collected into exhibitions, which typically present selections of recordings gridded into aggregate view.

“It gives you a full range of the density of submissions and people — what they look like and what they sound like as a cacophony, and then also the bring-forward moments that are sort of intensely personal and very individual,” says Laura Mott, Cranbrook’s curator of contemporary art and design. “So I think the video installation is supposed to really touch upon this macro and micro intentions of the project.”

Mott is responsible for The Truth Booth’s extended visit to Michigan, having successfully applied for a Knight Arts Challenge grant.
Will Sylvester and Hank Willis Thomas of Cause Collective made several visits to Michigan to scout locations prior to The Truth Booth’s official arrival, to ensure the best possible positioning and reception.

“The idea that there are many truths going on (in Detroit) is something that I think is happening in any city,” says Sylvester. “We go about our business in a certain way, and we do things in a certain way, and we don’t always think about the other parts of the city. So I think that’s going to be one of those really interesting things that we get to see by doing this tour — by moving to different parts of the city, we’ll get to see that, not only for ourselves but for the people who are involved in the project — meaning the people who go visit the booth.”

“It’s been really enlightening to see different realities,” says Thomas. “And really for this project, especially in the United States, just about the generosity of the participants, and hearing people and witnessing people kind of speak to a camera and expose themselves. Which is not an easy thing to do, but also their vulnerability allows them to be come more relatable and more beautiful to us.”

Cause Collective helpers and Cranbrook collaborators, including local documentarians The Right Brothers, interviewed people following their sessions with The Truth Booth.

“I actually love the concept,” says one young woman, captured in documentary footage during The Truth Booth’s visit to the bustling Banglatown neighborhood. “It’s kind of relief of daily things, or things that’s on your mind that you really can’t talk to anyone about. … You release that energy — and just pray and hope that it gets somewhere.”

It will get somewhere, indeed. Organizers and participants hope connection and understanding become possible when we take time to speak our truth and listen to the truth of others.

The “truth will out,” as Shakespeare once said. And come November at Cranbrook, secrets, revelations, and daily issues shared with The Truth Booth will be revealed.

The Truth Is I Hear You will be at the Cranbrook Art Museum Nov. 19 through March 19; for more information visit cranbrookartmuseum.org.