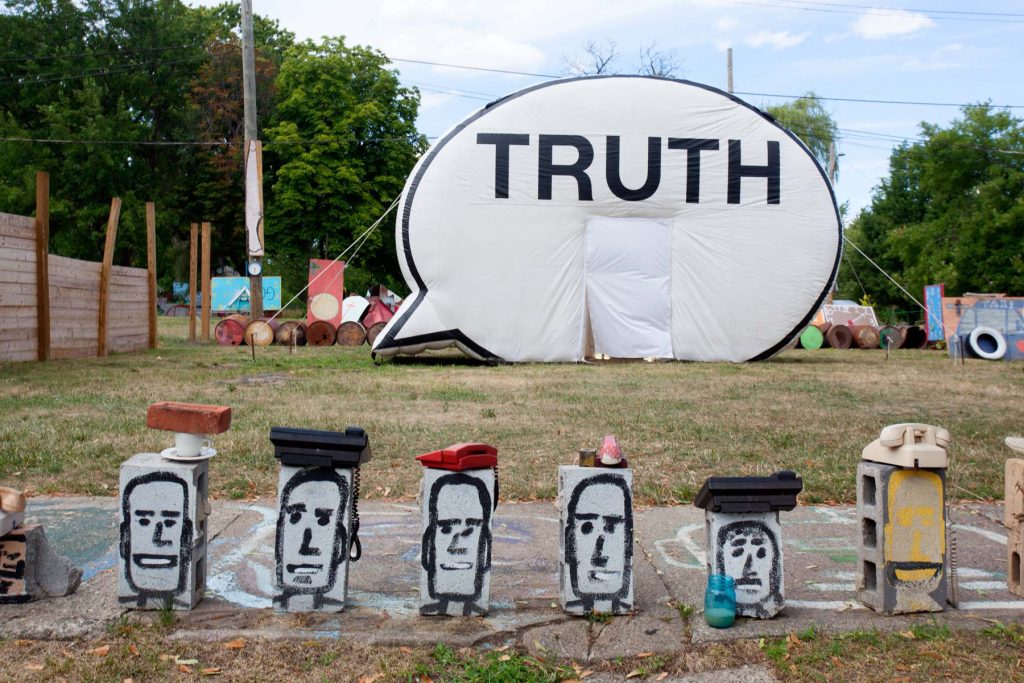 Last summer more than 1,000 Detroit and Flint residents told the truth in a giant bubble known as the Truth Booth. Some of their testimonies will be on view in “The Truth Is I Hear You,” an exhibition opening at Cranbrook Art Museum this weekend and running through March.

The Truth Booth, a public art project, toured to 11 sites across metro Detroit and the Flint area over two weeks in the summer. A cross-section of residents showed up to respond to an open-ended challenge: sharing their version of the truth. Their testimonies — two minutes or less — were recorded inside the billowy white thought bubble, which has traveled as widely as Ireland and Afghanistan.

On a lazy August summer Sunday, visitors stood in line for the Truth Booth at the Sidewalk Festival for Performing Arts on Detroit’s west side. Later that week, tourists and teens at the Heidelberg Project huddled around local artist Tyree Guyton after telling their truths. The booth also visited the Arab American National Museum and Rivard Plaza in downtown Detroit. The tour ended at MW Gallery in Flint. (A planned stop to Clark Park was canceled because of weather.)

The exhibition includes a selection of some of the most compelling recordings, which are broadcast on a 55-foot screen in continuous loop. Many more of the testimonials will be available in an online archive. The artists from the Cause Collective, who created the Truth Booth, spent hours combing through the amassed testimonies.

“The thing that kept coming across was how passionate people are about their city,” said Cause Collective member Will Sylvester. “No matter what the situation is, people here are willing to stick with their city and fight for it. That’s something unique about Detroit and Flint. People were talking about water crises, housing and homelessness.”

Topics ranged from the political to the personal. “In many ways, this project was always about the content that people produce for it,” said Laura Mott, Cranbrook’s curator of contemporary art and design. “I was not surprised that Detroit and Flint are filled with compelling, interesting people.”

In an adjoining room at the museum, visitors can learn about the impact of the project on the participants in a short film made by the Right Brothers and see documentation of the Michigan-portion of the tour by local photographer Corine Vermeulen. In another section, a film captures the Truth Booth’s international impact, including testimonials from Afghanistan, Ireland and other parts of the U.S. where the booth has toured. Organizers said they are making plans to take footage of the testimonials to the locations in Detroit and Flint area where the booth visited.

“In terms of visitors that don’t get an expansive look at the city, I think people will be quite touched at what people have in common, how passionate and articulate and interesting they are,” Mott said.