From the Vault Recent Gifts to the Collection 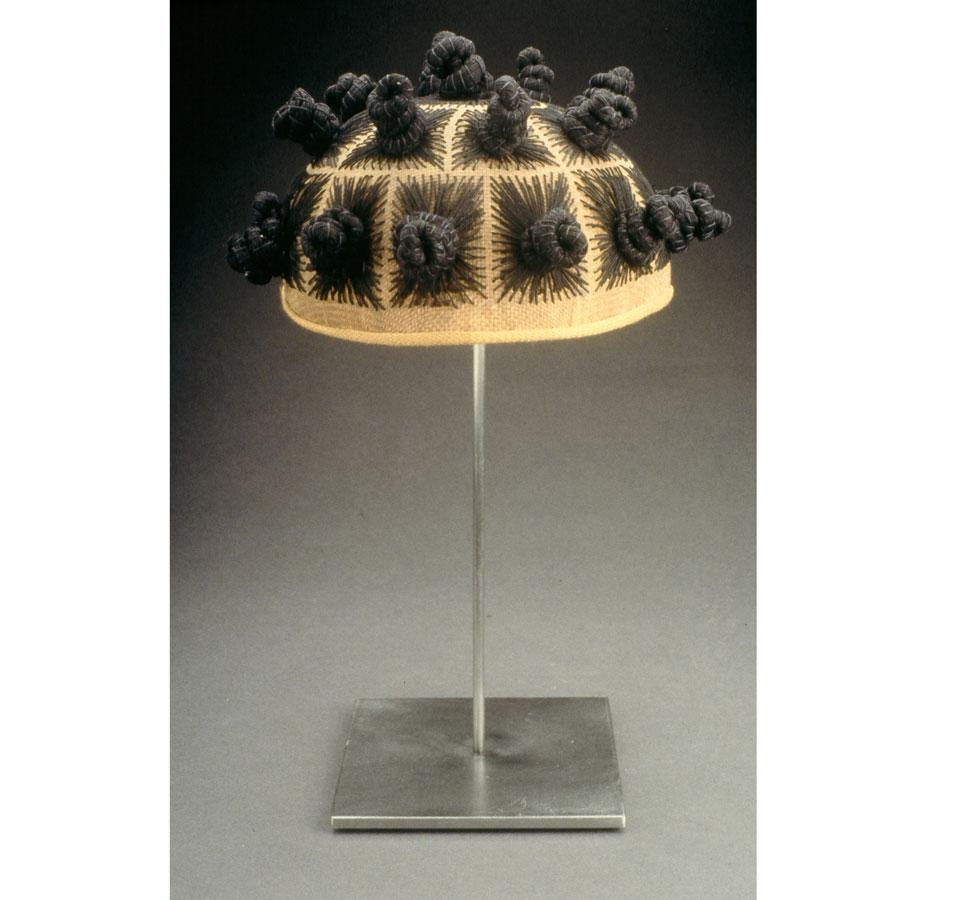 Sonya Clark was always drawn to art, but early on, her career took a few twists and turns.

“I was an artist from the start, but happened to go to a prep school, and art was one of those things you did to be well-rounded,” she says.

So, after high school, Clark went to Amherst College in Massachusetts, first in math and then psychology.

At Amherst, it became apparent her true passion was in textile arts.

“I studied with Rowland Abiodun, an African art history professor, and I became interested in what is now called material culture and the idea of thinking about culture and cultural stories as found in objects and material,” she says.

“My graduation gift from Amherst College from my parents was to go to West Africa, and I studied textile there,” she adds. “After that trip, I knew I wanted to get a degree in art, specifically in textile.”

That journey took Clark to the School of the Art Institute of Chicago — where she studied with Nick Cave, Anne Wilson and Joan Livingstone, all Cranbrook alumni — for her bachelor of fine arts degree, and next to the Cranbrook Academy of Art in Bloomfield Hills. She graduated with her master’s from Cranbrook in 1995 and went on to get an honorary doctor of arts back at Amherst College.

A handful of Clark’s art pieces will be on display at a new exhibition called “From the Vault: Recent Gifts to the Collection” at the Cranbrook Art Museum from Saturday, Nov. 19, through March 12.

The exhibition features recent and promised gifts to the museum, including works from Cranbrook Academy of Art graduates, modern and contemporary art from 20th century artists and pieces from Detroit artists.

“It’s a good representation of our collection and focus as a whole and shows the vision of our full collection,” says Laura Mott of Ferndale, curator of contemporary art and design at the museum.

Clark has three pieces in the exhibition: “Twenty-One,” “Curled” and “Freedom Mnemonic.”

“Twenty-One” is part of a wig series Clark made in the late-’90s, which takes from a traditional African-American hair style and technique, Bantu knots, that she had when she was a child. “It’s somewhere between a wig and headdress,” Clark says.

“Curled” is a piece made from old-fashioned curlers that “takes materials that we use to make hairstyles and turns those into a headdress,” she says.

“Freedom Mnemonic” refers to the North Star, which is the way many people of African descent found their way north to make their journey towards freedom.

Clark — who is chairwoman of the Craft and Material Studies Department at Virginia Commonwealth University School of the Arts in Richmond, Va. — is known for her work on headdresses.

“One of the things Rowland taught me at Amherst was that the ethnic group he is from, the Yoruba people, believe that the head is the seat of the soul — not the heart, but the head,” she says. “You find very elaborate hairdressing and crowns and headdresses in those cultures, because it’s like celebrating your soul or making altars.”

Clark says everyone is fluent in the language of textiles.

“Textiles are a language, a way in which culture and a sense of being is communicated,” she says. “I would say that’s true of any textile, in any place, but particularly for someone of African descent living in this part of the world the history and legacy of knowing how textiles are part of the culture in West Africa was really important to me. That is what initially drew me to use textiles as a medium.”

• If you go: “From the Vault: Recent Gifts to the Collection” runs from Nov. 19, 2016, through March 12, at the North Gallery at the Cranbrook Art Museum, 39221 Woodward Ave. in Bloomfield Hills. It’s free with museum admission.

Two other exhibitions open the same day: “The Truth Is I Hear You” and “Cranbrook Time Machine: Twentieth-Century Period Rooms.” For information, call the museum front desk at 248-645-3320 or visit cranbrookartmuseum.org.

Posted In: Cranbrook Art Museum in the News, From the Vault Recent Gifts to the Collection