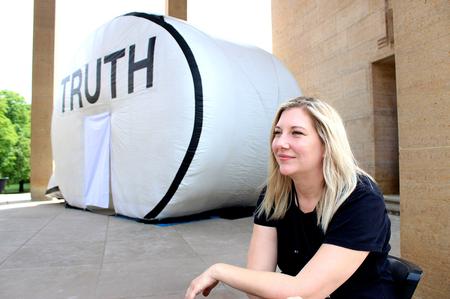 Laura Mott, Curator of Art and Design at Cranbrook Art Museum with the Truth Booth
December 15, 2016

The Truth Booth is a traveling, story-snagging sculpture created by artist Hank Willis Thomas and the Cause Collective. It was designed to capture unfiltered opinions of folks throughout the world, including Ireland and Afghanistan. The exterior of the aforementioned booth is shaped like a giant cartoon speech bubble with the word ‘TRUTH’ boldly printed on one side. The interior acts much like a photo booth, the kind you might encounter at a wedding, but it serves as a studio to record video responses from the public. Confessions, almost. Each video starts with the participant saying “The truth is …” and expounding from there.

This summer, The Truth Booth spent a couple weeks traveling to eleven neighborhoods in Detroit and Flint to record about one-thousand residents from Detroit and Flint residents. Now, these “truths” are on display as a 60-foot-wide video installation in the Cranbrook Art Museum.

While in Michigan, The Truth Booth experience was documented by Detroit photographer Corrine Vermeulen and video production team The Right Bros.

Laura Mott is curator of art and design at Cranbrook Art Museum, but she also wrote the initial grant that brought The Truth Booth to life. Who better to get the lowdown on this amazing exhibition than her?