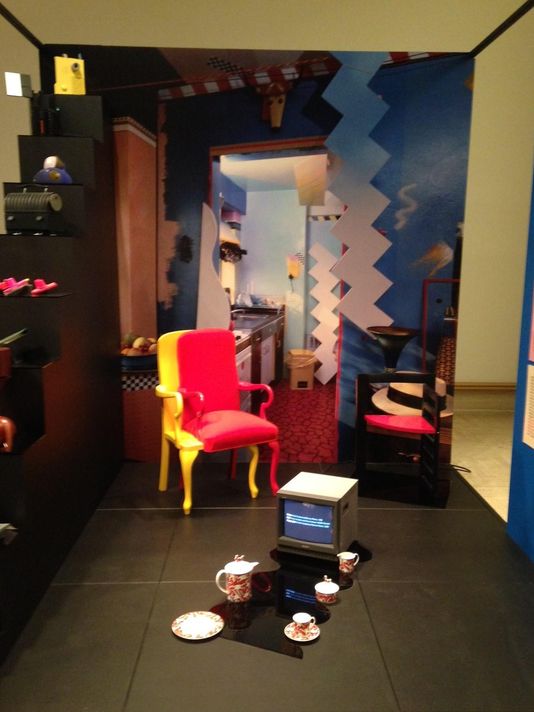 The deconstructivist 1980s are on display with “A Semiotic Funhouse” at the Cranbrook Art Museum. (Photo: Michael H. Hodges / The Detroit News)
December 21, 2016

by Michael Hodges, The Detroit News

“Cranbrook Time Machine: Twentieth Century Period Rooms” is a small but utterly charming show of four interiors that all channel the zeitgeist of their respective eras.

Drawn from Cranbrook’s vast reserves of furniture and artifacts, these little stage sets variously represent the early Arts and Crafts aesthetic that emerged in England during the late Victorian Period, the 1960s bachelor pad, a 1970s experiment in cave dwelling and a post-modern fun house circa 1980.

The show was curated by museum director Andrew Blauvelt and Laura Mott, curator of contemporary art and design.

Of the four spaces, “The Bachelor Pad” is easily the most fun with its styling from TV’s “Mad Men.”

It’s heavy on modernist furniture by George Nelson, Eero Saarinen and Charles Eames, and rich in accessories ripped from the pages of a Playboy magazine guide to stylish and irreproachable masculinity: ashtrays, tumblers, cocktail shakers and other symbols of virility.

Death and virility seemed to go hand in hand in the early 1960s. Not only is there a pack of Lucky Strikes cigarettes on the Saarinen tulip side table, but a stylized graphic salute to the joys of smoking dominates one wall and, really, this room’s entire outlook.

Equally intriguing, if not nearly as amusing, is “The Naturalist’s Athenaeum,” which reflects the late 19th-century Arts and Crafts style that George and Ellen Scripps Booth adored.

Of particular interest is the integration of natural elements — frames of butterflies, a stuffed owl and a small telescope — reflecting that century’s enthusiasm for documenting the natural world.

“A Semiotic Funhouse” is an eye-popping, post-modern collection of objects that celebrates color, odd shapes, historical jokes and, in some cases, cheerful bad taste.

The most original of the four environments is “The Cosmic Cave,” a 1970s-era psychedelic living space that almost seems to be trying to return to the earth.

A huge, shaggy “Cave Rug” by Cranbrook alum Urban Jupena undulates across the floor, and rises up at one end to form a slightly creepy, overhanging ceiling, complete with cave-like fabric stalactites.

Cheesy wood paneling on one wall, an ancient Egyptian artifacts or two and a sound design by contemporary Detroit artist Ingrid LaFleur completes the composition, which is both intimate and peculiar. 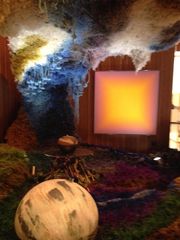