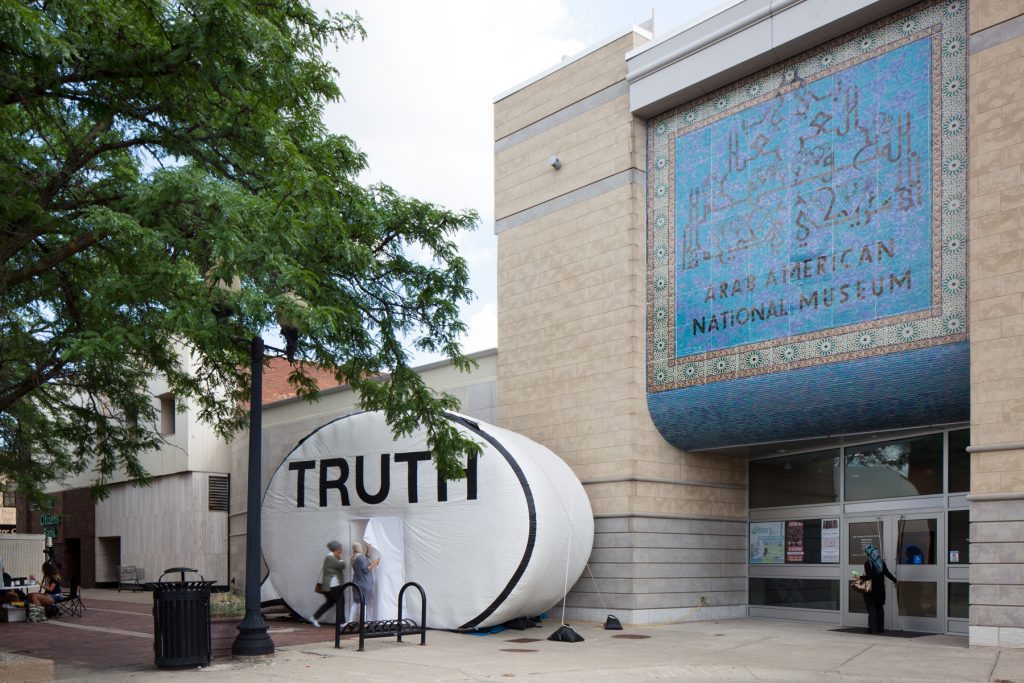 The Cause Collective's "Truth Booth" at the Arab American National Museum in August of 2016. Photography by Studio Corine Vermeulen

BLOOMFIELD HILLS, MICH., Feb. 15, 2017 — This summer, The Truth Booth set out on a tour of 11 locations in metro Detroit and Flint, giving more than 1,000 residents the opportunity to record a statement starting with the words, “The Truth Is…” The result is a 48-minute film showcasing local residents’ private hopes, desires and concerns.

This film is currently on display at Cranbrook Art Museum, but this week, will also be shown in some of the neighborhoods where the testimonials were recorded.

On Thursday, February 16, it will debut at the Arab American National Museum (AANM) in Dearborn, Michigan, where it will air continually during museum hours from February 16 through March 1.

Cranbrook Art Museum will also host a special one-day screening at Play House in Detroit on February 22. Residents of the nearby Banglatown neighborhoods are featured in the film, and there will also be a screening of the short documentary film about the project, produced locally by The Right Brothers.

The film is also currently on display at the MW Gallery in Flint.

According to Laura Mott, Curator of Contemporary Art and Design at Cranbrook Art Museum, this project has created a “composite ‘portrait’ of what is going on in the minds of our local residents.” Mott continues, “The aim of the project was to create conversations and offer people the opportunity to listen to perspectives they rarely hear, often amongst residents separated by mere blocks or miles. The video serves that purpose, but also creates a time capsule of our region during this historic year. The recordings were all made before the November election, however many ring true now more than ever.”

Several testimonials in the film were recorded inside The Truth Booth during a tour stop at the Arab American National Museum in August of 2016.

Ava Ansari, the Arab American National Museum Community Events Organizer, says, “this exhibition comes at a time when AANM is expanding its community-based programs and cultivating encounters to create communities beyond peripheries, contesting the standard conditions of art production and representation, and resisting the preservation of the profane life of art. We are thrilled to present The Truth Is I Hear You, a participatory project that reveals momentary and culturally contingent truths.”

The film was created by the artist group Cause Collective, and will be on display at Cranbrook Art Museum as part of the exhibition, The Truth Is I Hear You, through March 19. The Cause Collective consists of Ryan Alexiev, Jim Ricks, Will Sylvester and Hank Willis Thomas, a team of artists, designers and ethnographers who have toured their Truth Booth project around the world.

For more information about the project, and to watch video clips from inside the booth, please visit ourwebsite.

Major support for The Truth Booth provided by: