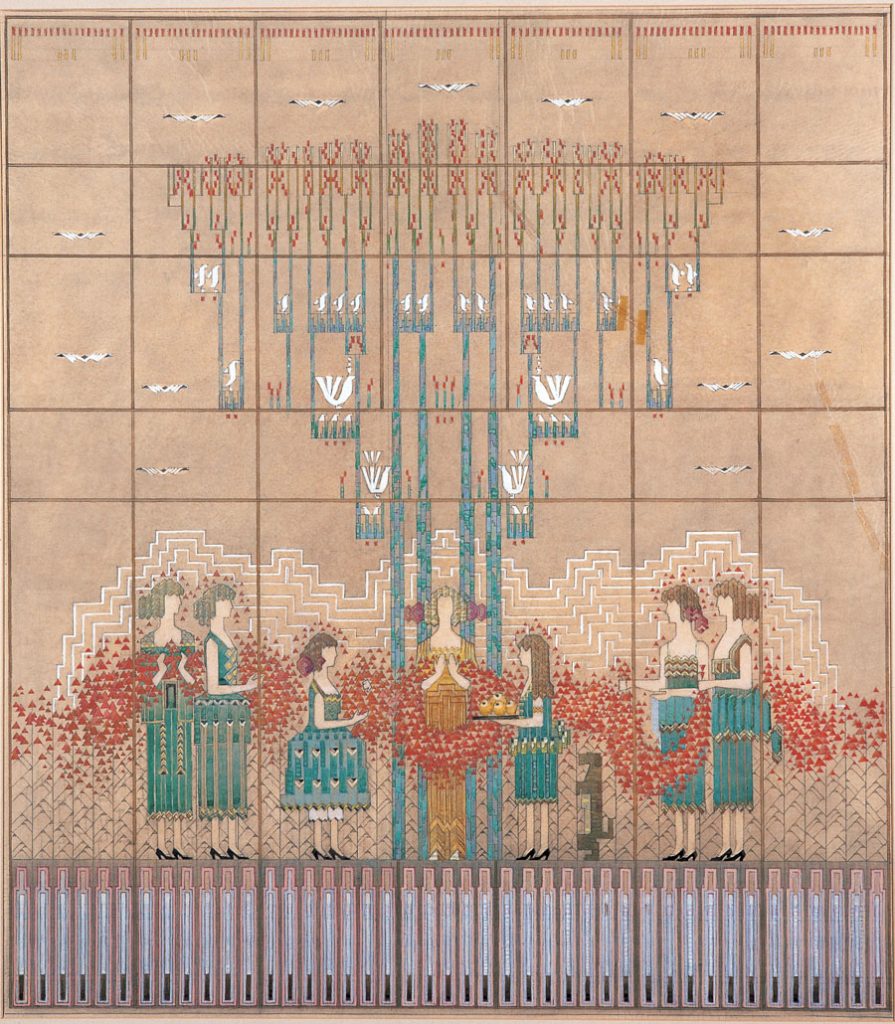 Loja Saarinen and Eliel Saarinen's Study for the Festival of the May Queen Tapestry, 1932

BLOOMFIELD HILLS, MICH., March 15, 2017 – Cranbrook Art Museum is pleased to announce the upcoming opening of our new exhibition, Finland 100: The Cranbrook Connection, which recognizes Finland’s centennial of independence and examines the profound influence this country has had on the development of the arts in America. The exhibition opens March 21 and runs through January 14, 2018.

According to Andrew Blauvelt, Director of Cranbrook Art Museum, design has always been a special strength of Finnish culture, exemplified by the Cranbrook campus itself. When designing Cranbrook, architect Eliel Saarinen blended the national romantic style he helped forge in his native Finland, with the Art Nouveau and Art Deco influences prominent in America at the time. Saarinen’s comprehensive philosophy that one should design in the context of the next larger thing—from the chair to the room to the house to the city—meant that no element of the built environment should be overlooked. Thus, he and his family designed Cranbrook as a “total work of art,” which The New York Times has called “one of the greatest campuses ever created anywhere in the world.”

Blauvelt continues, “One of Finland’s greatest cultural influences in twentieth-century America was through the talented Saarinen family and its creation of Cranbrook in Michigan. As an active educational community, that influence continues today. We are delighted to celebrate the many connections between Finnish and American culture at Cranbrook through this exhibition and related programs.”

The exhibition features many treasures of Cranbrook’s history, including architectural renderings by Eliel Saarinen, intricate weavings by his wife Loja, and furniture and furnishings by his children, Eero and Pipsan. Also included are works by Finnish-born Artists-In-Residence at Cranbrook, such as Maija Grotell, Head of the Ceramics Department (1938-1966), and Marianne Strengell, Head of the Fiber Department (1941-1961).

“The Saarinens created an active cultural dialogue with Finland,” says Steffi Duarte, the Jeanne and Ralph Graham Collections Fellow at Cranbrook Art Museum. “Through their efforts, expatriates like Grotell and Strengell not only came to live and work at Cranbrook, but visitors included luminaries like Finnish architect Alvar Aalto, whose work would inspire both Charles Eames and Eero Saarinen. We look forward to celebrating the robust networks between the two countries.”

The Center for Collections and Research will join Cranbrook Art Museum in celebrating Finland’s centennial with the first major reinterpretation of Saarinen House since the house museum opened in 1994. This summer, May 5 through July 30, the Center will be conducting tours that focus on the life and stories of the Saarinen family as part of the project, “Saarinen Home: Living and Working with Cranbrook’s First Family of Design.” The house will be closed in August for restoration work. Regular tours will resume for the season on September 1 and continue this year through Thanksgiving weekend. Tours are held on Friday, Saturday, and Sunday afternoons. Visit our website for a complete schedule.

The Museum and Saarinen House will also team up to offer special “Finnish Fridays” – four nights of special evening programming held on May 5, May 19, June 9 and June 23. Keep an eye on our website for details about these events and ticketing information.

Finland 100: The Cranbrook Connection is organized by Cranbrook Art Museum and curated by Steffi Duarte, the Jeanne and Ralph Graham Collections Fellow. The exhibition is made possible with generous support from the Clannad Foundation.