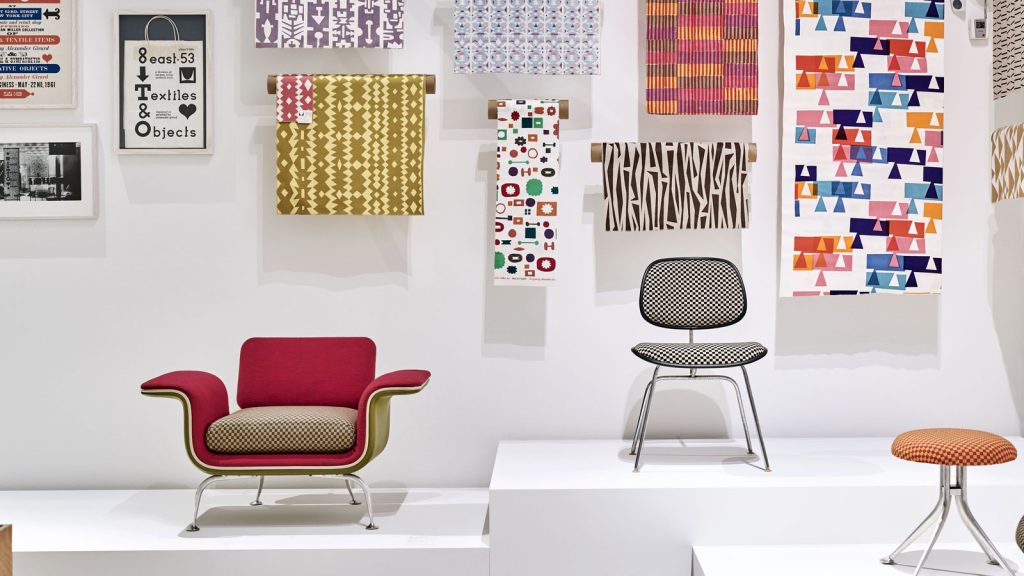 This first comprehensive exhibition of the influential designer opens June 17

BLOOMFIELD HILLS, MICH., April 17, 2017 –This summer, Cranbrook Art Museum will host the U.S. debut of the landmark exhibition Alexander Girard: A Designer’s Universe, the first major retrospective of this former Grosse Pointe resident known for injecting joy and humanism, history and handicraft, into environments that greatly enriched the visual language of mid-century modernism. The exhibition will run from June 17 through October 8, 2017.

While figures such as Charles and Ray Eames, Florence Knoll, Eero Saarinen, Harry Bertoia, Ruth Adler Schnee, and others are considered in the pantheon of mid-century modernism that was birthed in Michigan, Alexander Girard was less well-known but just as influential and important. “Girard is the secret sauce in a new kind of modernism that would emerge at mid-century, a distinctly American one that embraced the handcrafted, the whimsical, the decorative, the colorful — nearly everything that an earlier European modernism tried to banish,” says Andrew Blauvelt, Director of Cranbrook Art Museum.

Alexander Girard (b. 1907, d. 1993) transformed the tableau of post-war American design, from home to office and beyond, by creating opulent worlds in which everything was precisely coordinated, from the smallest details to the larger picture.

“Girard was a modern Renaissance figure, working in nearly every field of design, from textiles and furniture to graphics and architecture,” says Blauvelt. “Girard would champion the total design of what we today call the company’s customer experience, from the high-flying style of Braniff Airlines to his groundbreaking design of New York’s La Fonda del Sol restaurant. Given Girard’s strong Michigan and Cranbrook connections, it seems fitting that we should shine a light on his prodigious talents.”

Raised in Florence, Italy, and educated in London, Girard came to the United States through New York but settled in Michigan in 1937. He quickly began to form friendships and partnerships with many leading modernist innovators from Cranbrook, including Eero Saarinen and Charles and Ray Eames. In then staid Grosse Pointe, he established a modern design office, gallery, and retail space, and also designed several modern homes in the area, including one for his own family.

He was thrust into national scene when he curated the exhibition For Modern Living at the Detroit Institute of Arts (DIA) in 1949. In it, Girard transformed the museum’s Great Hall, introducing modern design to visitors and journalists with more than 2,000 objects and rooms designed by Charles and Ray Eames, George Nelson, Alvar Aalto, and many more. According to a 1949 bulletin from the DIA, the exhibition, “was one of the most successful ever held at the Institute, attracting more than 150,000 visitors.”

In 1952, Girard became the Director of Design for Herman Miller’s textile division, a post he held for 21 years. While there he innovated the field of textiles for modern furniture and office environments, creating more than 300 textile designs in a multitude of colors, as well as wallpaper, prints, furniture, and objects. According to the company, “through his use of primary colors, concise geometric patterns, and a touch of humor, he injected joy and spontaneity into his designs.” Although he relocated to New Mexico in 1953, Girard kept his ties to Michigan as head the textile and fabric division of Herman Miller, headquartered in Zeeland, Michigan—a major purveyor of modern design worldwide. Herman Miller is one of the presenting sponsors of the exhibition.

This landmark exhibition at Cranbrook presents hundreds of examples of Girard’s work, including furniture, textiles, graphics, architecture, and sculptures, as well as drawings and collages never shown before.

Girard and his wife Susan were avid pioneering collectors of folk art from the world, which they often incorporated into many modern domestic and corporate interiors, and from which he drew inspiration for many of his graphics. So vast were their holdings that it formed the basis of the International Folk Art Museum in Santa Fe, New Mexico. The show also presents numerous folk art objects on loan from the Museum.

Special Events
Cranbrook will host several special Girard-themed special events in conjunction with the exhibition throughout the summer.

Herman Miller’s Global Brand Director Sam Grawe and Corporate Archivist Amy Auscherman will provide an overview of Alexander Girard’s illustrious 21-year career with Herman Miller as Head of the Textiles Division. Their presentation will be followed by a conversation with grandchildren Aleishall Girard-Maxon and Kori Girard about the work of Girard Studio, which stewards the designer’s legacy. Free with Museum admission. More information here.

“Uncovering the Fantasy and Magic of Alexander Girard”
On Saturday, July 22, from 1-4pm, Cranbrook will feature the one-day symposium “Uncovering the Fantasy and Magic of Alexander Girard.” This fascinating examination of Girard will feature historian Deborah Kawsky who will introduce us to Girard’s Detroit days—from his modern design shop in Grosse Pointe to the architecture of his lesser-known residences. Curbed’s national architecture critic Alexandra Lange will discuss Girard’s uncanny ability to bring structure to seemingly disparate things, from found artifacts to city streetscapes. And curator Monica Obniski of the Milwaukee Art Museum will look at Girard’s prescient collection and use of folk art as an inspiration and antidote to modern design. A moderated discussion and question-and-answer session will follow the presentations. Free with Museum admission. More information here.

Family Day
On August 12, from 11am-3pm, the Museum will host a Girard-themed family day with a host of art-making activities. Children under 12 are always free.

Special Tours
Throughout the months of June, July and August, the Museum will offer special Saturday tours of the exhibition and Herman Miller-themed tours of our Collections Wing. Check our website for specific dates and times.

This exhibition is organized by the Vitra Design Museum, Weil am Rhein, Germany. Global sponsors are Herman Miller and Maharam.