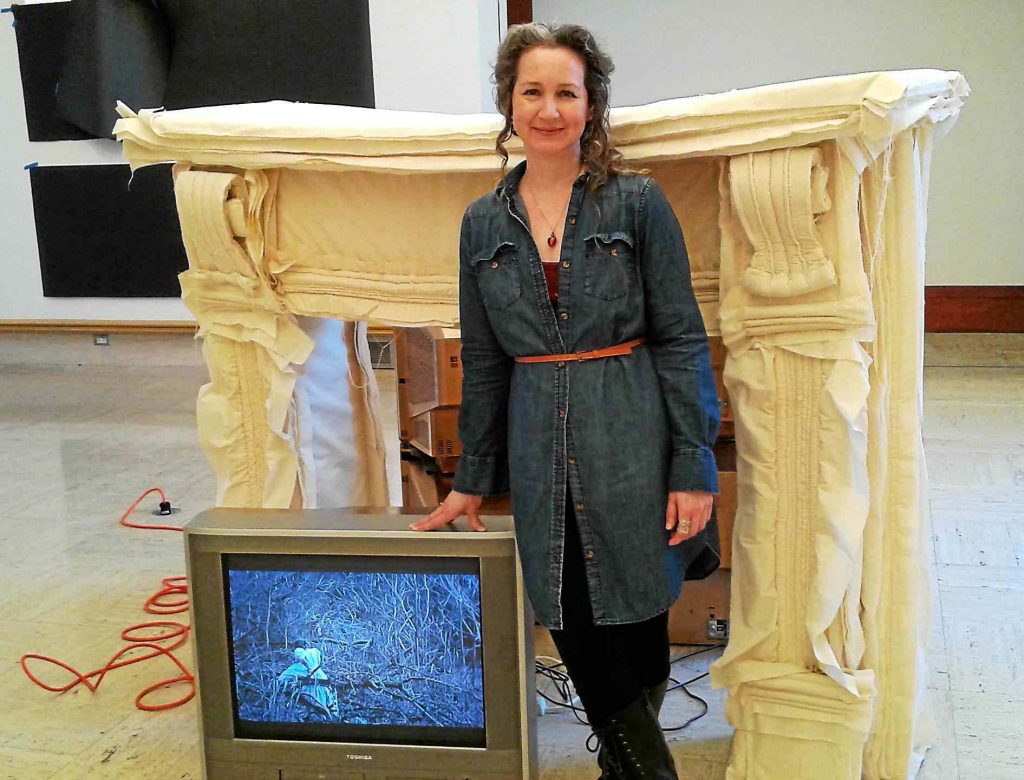 Anita Enriquez, a student in the Cranbrook Academy of Art’s Fiber Department, combined fiber, sculpture, architecture and video as well literature and performance art to create a folly, like the buildings known as follies. Photo by Joseph Szczesny
April 26, 2017

One uses a wedding dress to explore like a thread to bind the use of different media, another bends wood into an irresistible structure and another uses intricate patterns to explore both personal and political history.

The new artworks are part of one of Oakland County’s top cultural events every year, the annual Graduate Degree Exhibition of the Cranbrook Academy of Art, which opens to the public Sunday, April 23, and will be on display through May 14.

As part of the exhibition, the Academy also opens its studios to visitors from 1 to 4 p.m. Sunday.

Cranbrook spokeswoman Julie Fracker says the Academy’s graduating class is bit smaller than in 2016. But 64 students are displaying their work from multiple disciplines in the Cranbrook Art Museum in Bloomfield Hills, she says.

For Anita Enriquez, a student in the Academy of Art’s Fiber Department, fiber, sculpture, architecture, video as well literature and performance art to the theme of “folly.”

“I started with architectural follies,” she says. She made decorative pieces from fiber and fabric and moved on to the videos included in a piece on display at the museum. She also aimed to underscore that architecture — even in its most durable forms — has an ephemeral quality to it.

But her work also has a more personal side, says Enrique, who studied painting as an undergraduate at the California State University in Long Beach, and worked as a decorative painter before studying fiber art at the Art Institute of Chicago.

“I assumed a character by wearing the wedding dress in a series of videos,” she says. “It really doesn’t have a function. We wear it for one day and then we put it away. It’s representative of antiquated cultural motifs. I will be doing live performances in the dress.”

Enrique also will read in Spanish from Cervantes’ “Don Quixote” each day the exhibition. “The thesis for me is bring all these elements together and trying to figure out how they all function,” she says.

Another graduate student, Austin LeRoy Swick, developed an elegant wooden structure for the exhibition, using a computer and traditional woodworking tools to produce a piece of Japanese joinery-meets barn framing.

“I was trying to create this moment of people coming together,” he says. “There are four doorways. It’s basically like a small microcosm of a decision you would make. What direction are you headed? If it were outside or even inside it would force you to look up.”

Swick says he tried to position his work between furniture, sculpture and architecture.

“I kind of would hope someone would have a home for it or a purpose for it, like if they have space outside where they like to sit. It needs a good owner if it’s going to last.”

He studied at the University of Kansas before coming to Cranbrook for graduate school.

“It draws you in,” says Swick, who adds the base of the structure is filled with steel, so even though it might look fragile, it very sturdy.

Ato Ribeiro was born in Philadelphia but grew up in Ghana after his parents decided to return to Africa. He returned to the U.S. to attend Morehouse University. His father is Ghanaian and his mother is African-American and Haitian.

During the graduate exhibition, he is displaying an intricately crafted piece made of wood that draws on both his African and American heritage.

“I am using a lot of re-cycled material; a lot of it’s considered cheap or inexpensive wood,” he says. “I like the way people overlook it. It’s stuff that’s used for structural reinforcement. I used a band saw to slice them up and organize them.”

Embedded in the piece are symbols from African-American quilting used on the Underground Railroad, which helped slaves from the South move to Michigan and freedom in Canada, as well as from the kente cloth found Ghana, he says.

Ribeiro, a student the Cranbrook’s print media department, says the symbols were used as a form of communication to show places, some in Oakland County, where runaway slaves could find help. In Africa, the symbols in the cloth conveyed different meanings.

“Africans and African-Americans used it as language,” he says. “Since I was in the print media department there were a lot of conversations about text and image. It was a language I was exploring, using wood.” 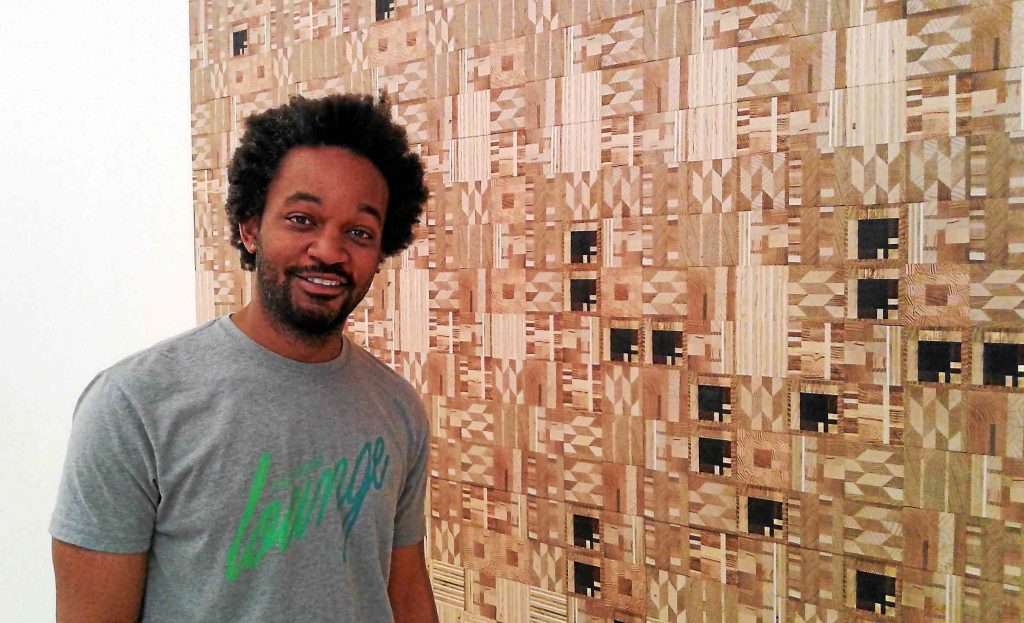 Ato Ribeiro, who grew up in Ghana, is displaying an intricately crafted piece that is made of wood that draws on both his African and his American heritage. Photo by Joseph Szczesny