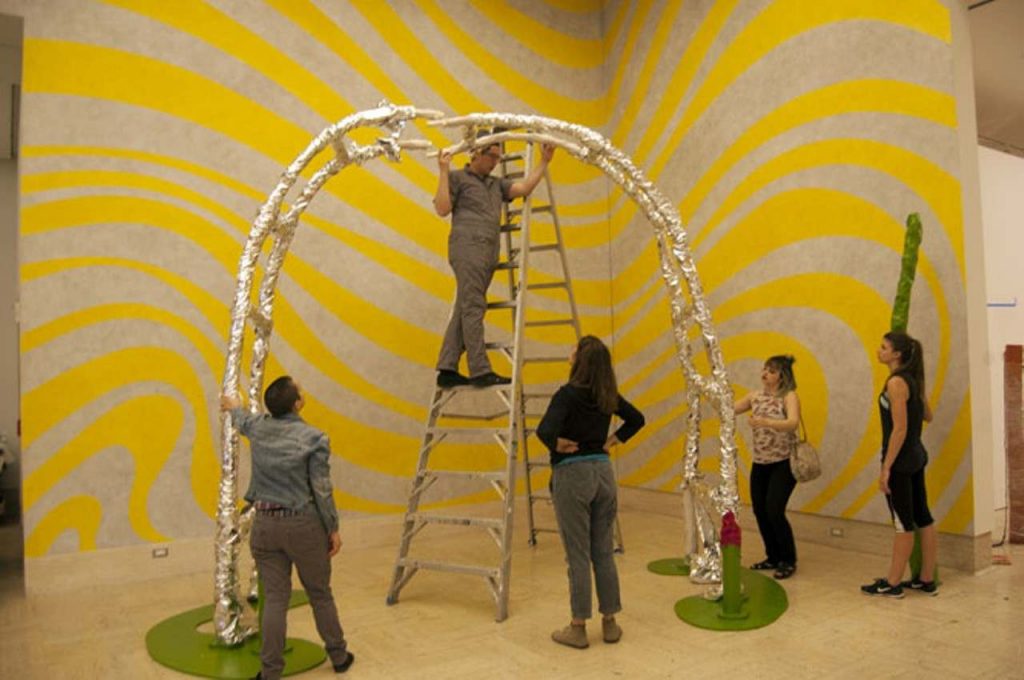 Fundamentally, metro Detroit’s two most prominent art schools — the College for Creative Studies and the Cranbrook Academy of Art — couldn’t be more different. While both are located off of Woodward Avenue, they’re worlds apart: CCS in the city’s core, and Cranbook in leafy, suburban Bloomfield Hills.

Of course, an environment inevitably informs an artist’s work, and it’s easy to see this with Cranbrook’s annual graduate student exhibition. While CCS’s student work may have more of an emphasis on technical virtuosity, Cranbrook’s student art tends to be — much like its wooded campus — sprawling, often featuring elaborate, large-scale installation work.

This year’s show features the work of the 64 graduates from Cranbrook’s two-year Master’s program. The school has 10 departments,with fewer than a dozen students in each. Cranbrook’s is the only completely studio-based program in the country — there are no classes. Students live and work on campus, working directly with their respective department’s artist-in-residence.

The small number of students means that the community is tight-knit. Setting up a show like Cranbrook’s is a lot of work, with students helping each other construct the elaborate installations. In one room, sculpture student Philip Košak directs students to help erect a foil-covered arch. It’s easily a five-person job.

The small program size also means the work is often interdisciplinary. For example, student Brandon Bullard says he studied drawing and painting as an undergrad at Colorado State University. While at Cranbrook, he was able to embrace fiber and installation art.

For Cranbrook’s show, he has constructed a hollow, oversized Rubik’s cube. The exterior panels are made from similarly colored garments — donations from Value World. On the inside, Bullard is putting the finishing touches on square-shaped videos that will be projected on a wall of white panels. Compiled from found footage, the videos show garments at various stages of production — from the creation of the textiles to foreign sweatshops to transportation to point of sale.

“A lot of my work has had to do with experience, and a person’s body moving through space, and getting different perspectives,” he says. He says the piece deals with “issues of labor and feminism” by forcing the viewer to confront the story behind the garments.

Outside, architecture student Elise DuChard is constructing a model of a house on an elevated platform. Similar to Bullard’s piece, it’s an experiential work — viewers are invited to duck underneath and stick their heads inside the house. DuChard says it’s a faithful simulacrum of an actual abandoned house she purchased at auction in nearby Pontiac.

Originally from New Jersey, DeChard studied architecture in upstate New York, and worked as an architect in New York City for seven years before decided to come to Cranbrook for grad school. “I wanted to do more creative things, where I was the stakeholder, so I could invent a project and create it and see what happens — as opposed to just client-based work,” she says. “That’s kind of the amazing thing about Cranbrook’s education, is you have this opportunity to make something a real thing, that continues beyond just the thesis show.”

Throughout her time at Cranbrook, she has renovated the house, with plans to open it as an experimental art space called Tessellate. Its garage will serve as an art gallery, she says, and the house will host international artist residencies in the summer months.

The installation of the show is overseen by Laura Mott, Cranbrook’s curator of contemporary art and design. Throughout the year, Mott works on the art museum’s exhibitions, typically working out logistics for work that already exists. But for Cranbrook’s graduate show, she is tasked with helping the students execute a work of art from conception to installation.

Planning starts six weeks before the show goes up. Mott says that entails one-on-one studio visits with the students to work out logistics and advise. Generally, students are given an 8-foot-by-8-foot space within the galleries. Based on the proposals, Mott says her job is to figure out a layout that works within the space. Of course, sometimes plans change. “That’s just the nature of being an artist,” she says.

The 2017 Graduate Degree Exhibition of Cranbrook Academy of Art runs through May 14 at Cranbrook Art Museum; 39221 Woodward Ave., Bloomfield Hills; 248-645-3320; cranbrookartmuseum.org; admission is $10; free for members. The campus will host open studios from 1 p.m.-4 p.m. on Sunday, April 30 where the public can tour the students work spaces and purchase art.