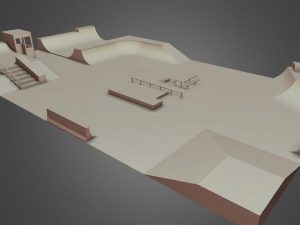 A computer rendering of the new Tony Hawk-designed skatepark that will be opening in Detroit on Aug. 16. (Photo: Library Street Collective)

Tony Hawk is bringing a skate park to downtown Detroit.

The skateboarding legend is overseeing the design of the modular pocket park that initially will sit at the corner of Farmer and Monroe, one block northeast of Campus Martius. It’s scheduled to open Aug. 16.

The Wayfinding skate park will not only be the first of its kind in downtown Detroit, it will also double as a performance space and public art installation featuring the work of acclaimed contemporary artist Ryan McGinness.

The project is a partnership between contemporary art gallery Library Street Collective, real estate powerhouse Bedrock, the Quicken Loans family of companies and the Cranbrook Art Museum, which will host a new exhibit of McGinness’s work starting on Nov. 17 and oversee additional cultural programming at the skate park in collaboration with Library Street Collective.

The partners would not reveal the cost of the project.

Wayfinding will be a placeholder until Bedrock’s massive Monroe Block development breaks ground in the area, which is expected in January 2018. At that point, the modular design of the park will allow it to be moved to another part of the city.

The park will be free and open to the public. It will feature six skateable elements, as well as a viewing area for spectators. Construction of the 4,600-square-foot park will be overseen by George Leichtweis of local skate shop Modern Skate & Surf, a staple in metro Detroit’s skate scene since the 1970s.

“We’re literally building a skate park that would take months and months to build in less than a month’s time,” says Anthony Curis, founding partner of Library Street Collective.

“It’s a long time coming for Detroit to have a state-of-the-art skateboard park, and we are proud to partner with Tony Hawk and others to make it happen,” said Helen Johnson, Quicken Loans vice president of strategic investment.

In an interview with the Free Press, Hawk expressed his excitement about bringing skateboarding infrastructure to the city’s high-profile, central core.

“It was a great opportunity to get something in the downtown area that is a proper skate park,” says Hawk, who is undoubtedly the most influential skateboarder of all time. “This one is exciting, although it’s not our usual style of skate parks. At the same time, I want to support anything that is public and will be available for people to skate.”

Hawk says a modular park built above ground without permanent concrete infrastructure offers unique design challenges, but that the construction of modular skate ramps has advanced in the past decade. The 49-year-old pro skater says the park is a “well-rounded design” that caters to “all skill levels and all different types of skaters” within a relatively small space.

Hawk didn’t rule out the possibility of a more permanent skate park in Detroit’s near future.

“I appreciate that they’re putting this effort and funding behind it — that’s all amazing to me,” says Hawk. “At the same time, I would like to know that there is something of more permanence in Detroit.”

Hawk’s affinity for Detroit has been well-documented over the past few years. In 2013, Hawk’s namesake foundation donated $30,000 to the Ride It Sculpture Park in Detroit. It’s currently working on the final phase of construction there. Last year, Hawk and his wife purchased a 120-year-old home in the city’s Woodbridge neighborhood.

“The real deal is in Detroit,” says Hawk. “It’s such a DIY philosophy, which is exactly what skating is in tune with. Detroit is just hip without trying.”

Hawk says that he’s still miffed that the X Games passed on Detroit’s bid to host the extreme sports competition in 2013. “I’m still a little bitter that it hasn’t been here yet,” says Hawk, who says he didn’t participate as an announcer at the X Games last weekend in Minneapolis because of the Detroit snub.

A quick search through Instagram shows Hawk’s passion for Detroit is more than just lip service. Photos show him skating in Detroit, including a stop at the Wig, a skate park at the former Wigle Recreation Center in Midtown.

Published in the Detroit Free Press.

Posted In: Cranbrook Art Museum in the News, Press Coverage