by Stacey Sherman, The Oakland Press

Nothin’ to do and nowhere to go? Don’t let the summer heat make you feel sedated.

Running through Oct. 7, Cranbrook Art Museum debuts the exhibition “Too Fast to Live, Too Young to Die: Punk Graphics, 1976-1986,” the largest exhibition of its kind, exploring the unique visual language of the punk movement as it evolved in the United States and the United Kingdom through hundreds of its most memorable graphics — flyers, posters, albums, promotions, and ’zines. Drawn predominantly from the extensive collection of collector Andrew Krivine, “Too Fast to Live, Too Young to Die” also includes a nod to the Detroit roots of punk.

Robert St. Mary, a local author and music historian, helped to curate the Detroit portions of the exhibition at the request of Cranbrook Art Museum. St. Mary was asked to contribute his knowledge of the Detroit punk scene as an extension of a project he is working on as a recipient of the 2017 Knight Foundation Arts Award. The project will document the city’s punk scene and its place in music history with an interactive website featuring interviews, photos and videos in addition to special vinyl record reissues and unreleased compilations, with the Cranbrook exhibition being the first of several public events. 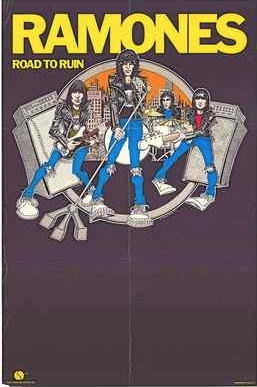 In his 2015 book, “The Orbit Anthology,” St. Mary focused mainly on the punk scene at Bookies, known as the original punk nightclub in Detroit. Punk first became a movement more than 40 years ago. Most people know about the famous New York, London and Los Angeles bands and venues, but St. Mary points out that the origins of punk are really right here in Detroit.

“When we talk about punk, the primordial ooze of it is here. With The Stooges and the MC-5,” St. Mary said during a recent conversation. “There’s an old joke that The Ramones were four people who didn’t like each other but they all liked The Stooges.

He brings context to the work of Paul Zimmerman and Jerry Vile, who ran “White Noise,” a Detroit punk magazine from 1978-80, and artist/musician Tesco Vee, who produced the Xerox fanzine “Touch and Go” for several years starting in 1979. Both magazines were extremely influential in the early punk scene and are excellent examples of different aesthetic styles that are showcased in the Cranbrook exhibition.

Tesco Vee says that “punk has always been an outsider movement that’s populated by fringe … that’s why it still resonates with kids nowadays. It’s a form of self-expression, a craft, an art to be sure.” In a recent phone conversation, Tesco credits his mother for his love of writing, which led to him starting “Touch and Go,” because he felt “passionate about the independent music scene and someone had to write about it.”

“There was just an energy, just a roots organic feeling and we felt like we were part of something special,” Tesco says.

Even people who aren’t familiar with punk will find something interesting at the exhibition. Many punk elements are found in design and fashion. A lot of borrowed punk culture got sucked up into the mainstream after bands such as The Ramones and The Sex Pistols became famous. Its impact is still being felt today — what started out as a DIY movement became more inclusive and diverse ­— seen in music, fashion and culture even today.