There’s no doubt the do-it-yourself mentality of punk rock runs through the DNA of Shepard Fairey’s work.

With his retrospective exhibition “Salad Days, 1989-1999,” which arrives this weekend at the Cranbrook Art Museum, the iconic contemporary artist looks back on how the anti-authoritarian attitudes associated with skateboarding and the punk rock that provided the sport’s soundtrack influenced his work.

The DIY approach is evident throughout the exhibition, which was produced with the assistance of Detroit contemporary art gallery Library Street Collective and spotlights the punk aesthetics, philosophies and low-tech production methods used in the first decade of Fairey’s 30-year career.

The Cranbrook show is far from the first local showing of Fairey’s work. He exhibited in Detroit in 2000 at the now-defunct contemporary art gallery C-Pop, and in 2015, Library Street Collective showed his work at its downtown gallery.

The new show is “not only framed pieces,” says Fairey, who is spending the week before the opening in metro Detroit to prepare for it. “There’s also a lot of different pieces of ephemera that show process.”

Before computers had cemented their place in the toolbox of graphic designers, Fairey says he often made late-night visits to his local copy shop to use the copy machine. (The exhibit has the receipts on display to prove it, too.)

“Doing things by hand gives you a different attention to detail,” says Fairey, who has straddled the line between analog and digital work throughout his career.

It’s a primitive creative process that many artists raised in the digital era couldn’t imagine using today, “but from the invention of Gutenberg’s printing press to about 1992, most people did that way,” he says with a laugh.

Graffiti? Not so much

By looking back, the Cranbrook exhibition manages in many ways to set Fairey’s origin story straight.

While the 48-year-old artist has become a poster child for the sprawling genre of street art and an array of murals around the globe (including a massive 184-foot mural in downtown Detroit), he says graffiti wasn’t the hugely influential element during his formative years that many consider it to be.

“I grew up in South Carolina (in the 1980s) where there wasn’t a lot of New York-style graffiti,” says Fairey, who spent his formative years in Charleston. “There was scrawling on walls, but not artistically.”

Instead, it was the gritty, back-to-basic aesthetics of punk rock counterculture that played a primary role in shaping him.

For example, the limited color palette of black, red and cream that dominates his work today is influenced by conceptual artist Barbara Kruger and Russian constructivist propaganda but also by the logos and album covers of seminal punk bands like Black Flag, the Sex Pistols and the Dead Kennedys.

It’s a point of reference that is perfectly demonstrated in Cranbrook’s complementary art exhibition “Too Fast to Live, Too Young to Die: Punk Graphics, 1976-1986,” which opens  Saturday and runs through Oct. 7 alongside the Fairey show. 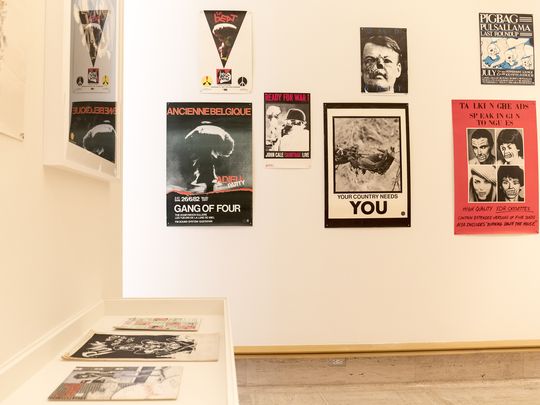 The exhibit “Too Fast to Live, Too Young to Die: Punk Graphics, 1976-1986” is running at the Cranbrook Art Museum alongside the Shepard Fairey exhibit. (Photo: Kathleen Galligan, Detroit Free Press)

“Fairey’s exhibit is kind of a sequel” to that era, says Cranbrook Art Museum director Andrew Blauvelt, noting that a critical mass of New York-based artists helped define the genre of street art and influenced the next generation of artists like Fairey.

Blauvelt says that beyond the tools, techniques and processes that Fairey uses in his work is an attitude of disrupting the hierarchies of the contemporary art world that pairs perfectly with punk rock.

“Fairey is really interesting for this time because we would describe his work as being viral, even in 1989 before the Internet is really a thing,” says Blauvelt, referencing the organic spread of Fairey’s guerrilla-style sticker campaigns early in his career. “His idea of doing direct action in the street is not unlike having to self-promote with fliers for bands and for concerts.”

In many ways, the alternative ecosystem that informed Fairey and that encompasses punk culture, the do-it-yourself aesthetic and street art is the same ecosystem that Fairey has helped propel into the mainstream. 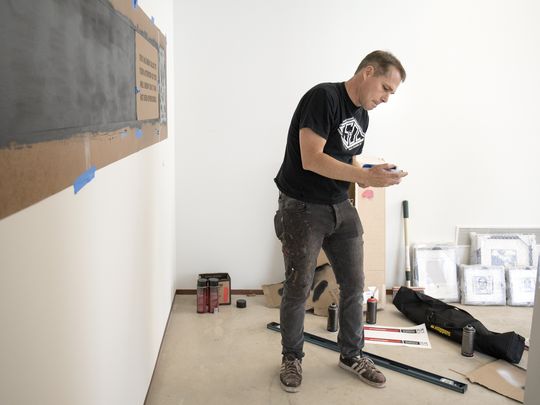 Shepard Fairey listened to music by punk band the Misfits while setting up his show this week at the Cranbrook Art Museum. The exhibit is “not only framed pieces,” says Fairey. “There’s also a lot of different pieces of ephemera that show process.” (Photo: Kathleen Galligan, Detroit Free Press)

In 2008, he created the iconic “Hope” poster supporting Barack Obama’s run for the presidency. It became a historic milestone for the arts as a political force and propelled Fairey into a stratosphere of notoriety reserved for just a handful of contemporary artists.

The attention his work gets now has certainly helped create opportunities for other artists, but it has also led to questions that have haunted him throughout his career: How does a counterculture artist reckon with success in a capitalistic society that he criticizes via his work?

“Anybody that analyzes my work in a sophisticated way could figure out that self-empowerment is what drives me and also supporting causes that I believe in,” says Fairey, who notes that the majority of his work has a charitable, socially conscious element. “I have a lot of freedom from being self-reliant with the success I’ve had creating and selling my own stuff.”

It’s an idea that doesn’t stray far from the punk rock ethos that helped forge Fairey into the artist he is today.

“When you’re true to your vision and incubate it in a way that’s not based on popular culture,” says Fairey, “you’re likely to do something more enduring.”