From album covers to concert posters, each genre of music comes equipped with its own visual language that often feels like an extension of the music itself.

At the Cranbrook Art Museum’s new exhibition “Too Fast to Live, Too Young to Die: Punk Graphics, 1976-1986,”  punk rock’s visual lexicon gets its due. The exhibit is considered to be the largest of its kind and includes displays featuring posters, zines and everything in between.

While “Too Fast to Live” isn’t an exhibit based on musical history, it does manage to present a roughly chronological and visual timeline tracing the evolution of the punk and new wave music genres overseas and in the U.S. via New York City.

During this era, New York served as ground zero for a critical mass of counterculture musicians and artists who were forging an aesthetic that continues to be an influential force in contemporary design.

The exhibit starts in 1976 when artwork was still relatively minimal, gritty and primitive and before a more expansive palette of patterns and colors arrived alongside the expanded sonic palette of new wave music.

“That’s the arc of the show — from a black-and-white gritty feel to this explosion of color and pattern,” says Cranbrook Art Museum director Andrew Blauvelt. “The graphic language of punk was much broader and really paralleled what was happening — and was even ahead of — contemporary art in the 1970s and 1980s.”

Blauvelt says patrons will be quick to recognize the work of a featured artist who, in many ways, defined the visual representation of the punk rock movement.

“What most people think of when they think of punk is the work of Jamie Reid,” says Blauvelt. “They may not know him by name but they would certainly know him by his work with the Sex Pistols.” 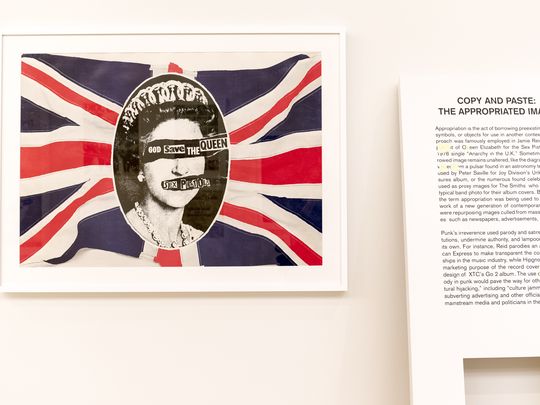 “Too Fast to Live, Too Young to Die: Punk Graphics, 1976-1986” includes the work of Jamie Reid, who helped define the visual representation of the punk rock movement through his work with the Sex Pistols. (Photo: Kathleen Galligan, Detroit Free Press)

In Reid’s creations for the seminal UK punk rockers were key ingredients that resonate within the genre today — ransom note typography, stolen images from mass media outlets and a rich sense of satire and irreverent humor.

“One of the big themes in this show is do-it-yourself culture,” says Blauvelt. “Punk really represents a high point of that idea of self-produced literature and music.”

There’s a clear Michigan connection, too.

Following in the footsteps of Michigan proto-punk bands like the MC5 and the Stooges, punk bands like the Sex Pistols and the Clash created music that was directly in response to the over-the-top, over-produced mainstream rock band theatrics that dominated the era as well as 1980s political conservatism in both the U.S. and abroad.

Blauvelt says the exhibition also shows how the language and attitude surrounding how artists use intellectual property today has changed dramatically.

“It totally prefigures the way we talk about the use of images today,” says Blauvelt. “For example, when you say remix, most people today understand what that concept is because we can sample almost anything.”

At the time, Blauvelt says, “remix” was still very much “image theft” — and, like punk itself, it courted controversy.

“There was all this ethical morality trapped in that language at that time,” says Blauvelt. “People were offended by it and didn’t think it was honest or artistic.”

Today, it’s part and parcel of the culture itself, says Blauvelt.