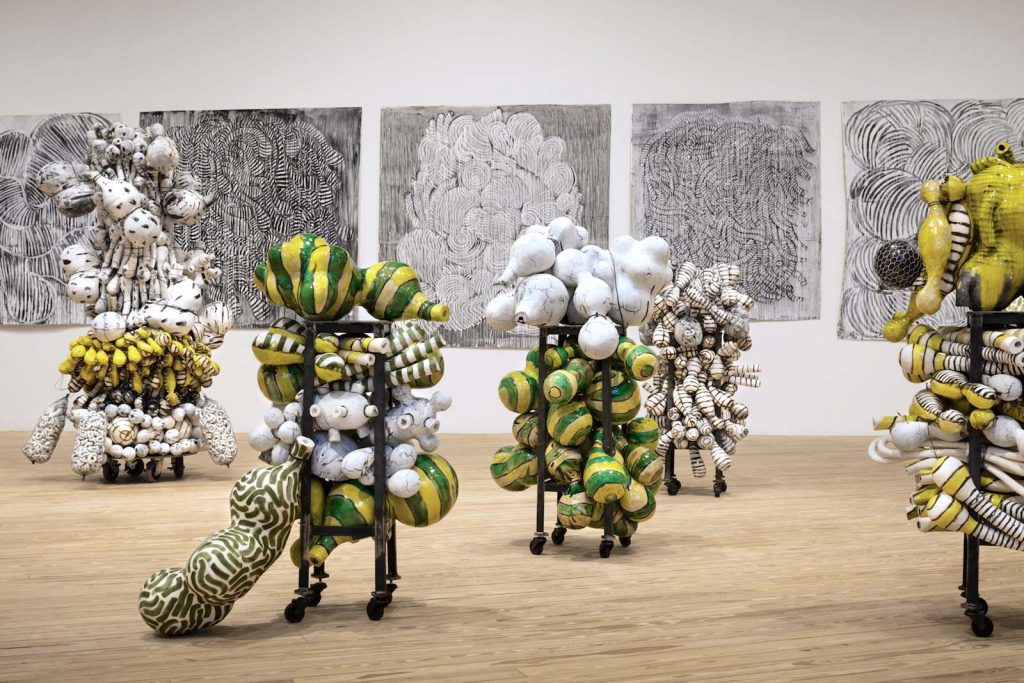 Bloomfield Hills, Mich., August 16, 2018— This November, Cranbrook Art Museum will open three exhibitions that showcase the incredible range of alumni and Artists-in-Residence that have emerged from Cranbrook Academy of Art and the significant impact they have made in the art world.

Annabeth Rosen: Fired, Broken, Gathered, Heaped; Binion/Saarinen: A McArthur Binion Project; and Danielle Dean: A Portrait of True Red will all open at Cranbrook Art Museum on November 17. The Annabeth Rosen and McArthur Binion exhibitions will run through March 10, 2019, and the Danielle Dean exhibition will close on January 6, 2019 to be followed by an upcoming exhibition by Cranbrook Academy of Art Ceramics Artist-in-Residence, Ian McDonald.

“Cranbrook Academy of Art’s legacy is known worldwide, but is often overlooked in the Metro Detroit area,” says Andrew Blauvelt, Director of Cranbrook Art Museum. “Our hope with this series of exhibitions is to shine a light on the contributions of both the students that study at the Academy and the notable artists who mentor them. The work emanating out of the Academy has in many ways shaped the world of art and design, and these exhibitions will show how relevant and contemporary that work continues to be.”

Annabeth Rosen: Fired, Broken, Gathered, Heaped is the artist’s first major museum survey that chronicles more than 20 years of Rosen’s practice. A 1981 graduate of Cranbrook Academy of Art and a critically-acclaimed pioneer in the field of ceramics, Rosen brings a deep knowledge of the material’s history and processes to the realm of contemporary art.

“We are honored and delighted to present Annabeth Rosen’s work at Cranbrook, “ says Andrew Blauvelt, Director of Cranbrook Art Museum. “It is a homecoming of sorts for one of the most important contemporary sculptors working in the medium of clay. Rosen’s monumental and expressive works are a testament to her formidable skills and expansive vision.”

The exhibition comes to Cranbrook from the Contemporary Arts Museum Houston where it debuted in 2017. It was curated by Valerie Cassel Oliver. Oliver and Rosen will both discuss the exhibition at a public lecture at Cranbrook Art Museum on Saturday, Nov. 17 from 1-3pm.

Rosen has consistently expanded her practice to encompass installations that meld materiality and process. Her works, whether diminutive or monumental, are composed through laborious additive processes that push the medium beyond spectacle and into dialogues about endurance, labor, and feminist thought, as well as nature, destruction, and regeneration.

The exhibition features more than 100 pieces and includes large-scale works on paper that mirror the trajectory of the work executed in clay. Speaking to dualities of her art, Rosen has said, “Much of the work is made with already fired parts broken, reassembled, re-glazed, and re-fired with the addition of wet clay elements if necessary. I work with a hammer and chisel, and I think of the fired pieces as being as fluid and malleable as wet clay.”

The Cranbrook Art Museum presentation of Annabeth Rosen: Fired, Broken, Gathered, Heaped is generously supported by the Maxine and Stuart Frankel Foundation. Organized by the Contemporary Arts Museum Houston and curated by Valerie Cassel Oliver, the exhibition is made possible in part by grants from the National Endowment for the Arts and The Andy Warhol Foundation for the Visual Arts. 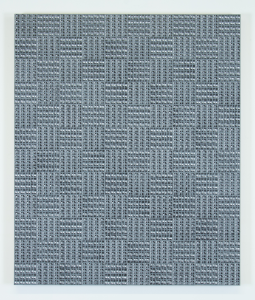 In the studio of Chicago-based painter McArthur Binion, a handwritten note has been pinned to the wall for a decade that reads “Binion/Saarinen.” The artist’s initial concept was to create a painting inspired by architect Eliel Saarinen and his design of Cranbrook’s historic campus, where Binion received his MFA in Painting in 1973. Through this new exhibition at Cranbrook, this early spark of an idea will be realized with the debut of seven new works created by Binion displayed alongside a selection of Saarinen objects curated by the artist.

Binion is returning to the genesis of his painting practice rooted in his formative years at Cranbrook, where he spent a significant time exploring the grounds, architecture, and designs of Saarinen.

“Binion is a fascinating example of how architectural intentionality resonates in those who live and learn within it,” says Laura Mott, Senior Curator of Contemporary Art and Design at Cranbrook Art Museum. “As David C. De Long describes in Design in America: The Cranbrook Vision 1925-50, the legacy of Cranbrook graduates is the production of ‘diverse expressions linked not in appearance or even clearly specified principles of design, but rather a consistent attitude towards place and materials.’”

As an exercise in autobiographical cartography, Binion’s new works will be derived from research of Saarinen’s biography and exhibited alongside selections of the architect’s drawings, concept sketches, and design objects, as well as one work from Eliel’s son Eero Saarinen.

Born in Mississippi on a farm and raised in Detroit, Binion repeatedly uses documents of his life—his birth certificate, personal phone book, identification portraits—as the first layers in his paintings. He then builds the surface with hard-pressed oil stick or crayon in grid patterns, creating a visual profile that aligns his work within the traditions of postwar abstraction and Minimalism. However, personal biography is typically absent in these movements, and Binion’s work communicates a distinctly African-American narrative and a pursuit of selfhood.

Binion/Saarinen: A McArthur Binion Project is organized by Cranbrook Art Museum and curated by Laura Mott, Senior Curator of Contemporary Art and Design. The exhibition is supported by the Maxine and Stuart Frankel Foundation and members of the Museum Committee and ArtMembers at Cranbrook. 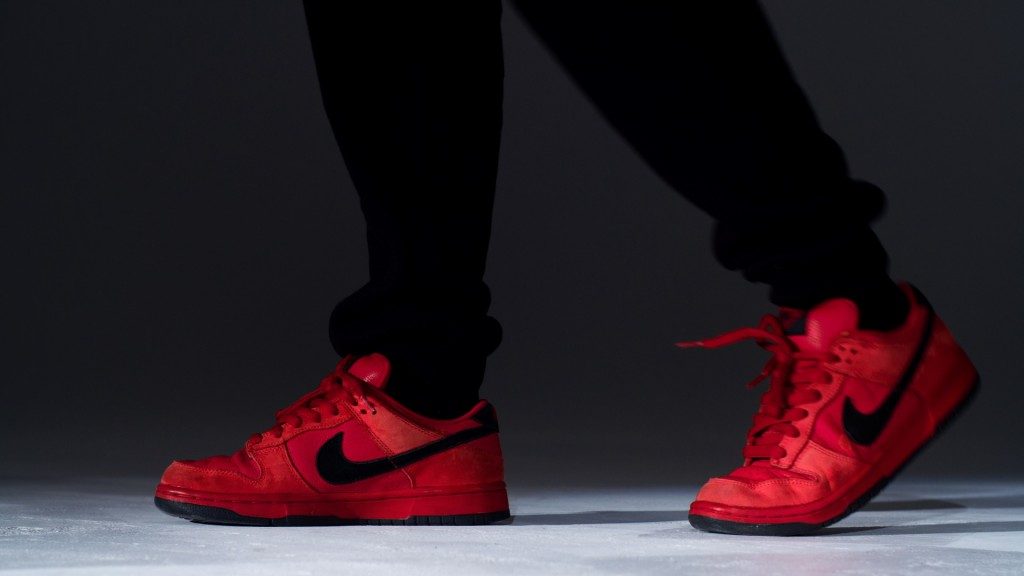 Danielle Dean, A Portrait of True Red, 2016 Courtesy the artist.

Minimally staged against a backdrop of cast shadows that recall the bodily gestures and athletic poses from Nike commercials, the protagonist dons a pair of the vermillion trainers while relating a tale of vampiric colonialism and the violence of subjugation. Dean’s work examines the construction and commodification of race, gender, age, and class, while exploring themes of colonialism and global capital, often by blending fiction and reality and blurring subject and object.

Danielle Dean is Artist-in-Residence and Head of the Photography Department at Cranbrook Academy of Art. Her work has been presented at numerous venues in the U.S. and abroad, including Lafayette Anticipations, Paris; Studio Museum Harlem, New York; Hammer Museum, Los Angeles; and the Museum of Contemporary Art, Detroit.

Danielle Dean: A Portrait of True Red is organized by Cranbrook Art Museum and curated by Andrew Blauvelt, Director with the assistance of Ian Gabriel Wilson, Jeanne and Ralph Graham Collections Fellow. Cranbrook Art Museum exhibitions and programs are generously supported by the Maxine and Stuart Frankel Foundation.