Bloomfield Hills, Michigan, October 9, 2019 — On December 14, Cranbrook Art Museum will open three exhibitions devoted to the exploration of craft and the innovative people and teaching methods that shaped the field of design for generations. There will be an opening reception for the exhibitions on Friday, December 13, from 6–9pm. 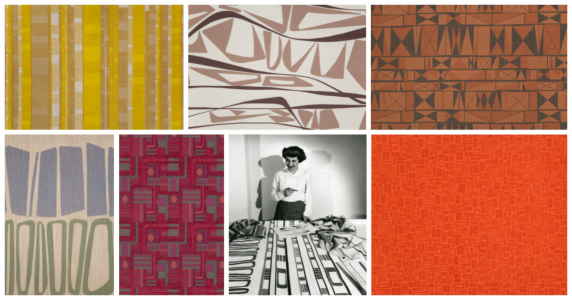 This new retrospective exhibition presents the work of Detroit textile and interior designer Ruth Adler Schnee. An innovator who is still in practice at age 96, her seven-decade career shaped the look and feel of the midcentury modern interior. Adler Schnee was one of the first women to graduate from Cranbrook Academy of Art in 1946, and this exhibition aims to highlight the contributions Schnee made to the midcentury modern movement. It will open at Cranbrook Art Museum on December 14 and run through March 15, 2020.

The heart of the exhibition will be the body of textile patterns that Adler Schnee has created over the course of her career, including the screen-printed fabrics whose broad appeal to modern architects and everyday clients elevated her stature in the midcentury modern movement. It will also include vintage textiles, archival drawings and photography, and examples of her ongoing textile collaborations with companies such as Anzea Textiles and KnollTextiles. Knoll recently signed a 20-year contract with Adler Schnee when she turned 91.

“This exhibition aims to remedy the underrepresentation of Ruth’s pivotal role in the development of the American midcentury modern interior in design history,” said Andrew Blauvelt, Director of Cranbrook Art Museum. “Her textile patterns are interrogated both as wholly designed objects, valued for their ingenious use of material, technique, and design sensibility, and as tools in her self-styled space planning practice and architectural collaborations.”

Born to a German Jewish family in Frankfurt, Germany, Ruth’s mother’s Bauhaus training and creative circle of friends developed Adler Schnee’s interest in vibrant use of colors, rich textures, modern form, and the thoughtful study of architectural space from an early age. Following the Nazis’ Kristallnacht pogrom of 1938, the Adler family fled to the United States and settled in Detroit. First studying fashion design at Cass Technical High School and then interior architecture at the Rhode Island School of Design, Adler Schnee went on to receive an MFA in Design from Cranbrook Academy of Art in 1946.

She went on to found a design consulting firm and modern design shop in Detroit with her husband Edward Schnee in 1948, launching a business which brought good design into important modern homes and larger institutions through the 1970s. Their store was one of the first in the country to sell modern furniture and fabrics. She not only introduced the Detroit area to the movement, but also received commissions to contribute drapery to the Ford Rotunda in Dearborn, and her designs could be seen at the General Motors Technical Center in Warren and Yamasaki’s World Trade Center in New York.

In conjunction with the exhibition, the museum is producing a 224-page monograph on the designer that surveys her prolific career. The handsome hardback edition is covered in an interpretation of one of her vintage designs. Contributors include Susan Brown, Associate Curator of Textiles at the Cooper Hewitt, Smithsonian Design Museum, who provides a survey of Adler Schnee’s textile designs and production, Deborah Lubera Kawksy, independent art historian, who narrates a biographical sketch of the designer’s life and business, and exhibition curator, Ian Gabriel Wilson, who writes a historical analysis of her interior design commissions and architectural collaborations.

“Through the exhibition and an accompanying publication, this project situates Adler Schnee’s practice within her professional network of peers and collaborators, while unraveling her rigorous design processes,” says Ian Gabriel Wilson, Jeanne and Ralph Graham Collections Fellow at Cranbrook Art Museum and exhibition curator. “Her strategies for intuitive, organic design filled her textile production, informed her interior architectural commissions, and guided her modern design shop and consulting business. Throughout her career, she continued to perfect the relationship between form and function, and we’re thrilled to be able to recognize her accomplishments here, at the place where much of this work began.

Adler Schnee has received significant recognition throughout her career. Her textile designs received national textile design awards in 1947, 1948, 1957, and 1958. She collaborated with numerous modern architects on interior designs, including Eero Saarinen, Buckminster Fuller, and Minoru Yamasaki. In the 1990s her designs were reissued by Unika Vaev, translated into woven fabrics by Anzea, and adapted by KnollTextiles in 2012. She has received the Kresge Eminent Artist Award (2015), the Women in the Arts Lifetime Achievement Award, and American Institute of Architects’ International Color Award, among others, and is the subject of the documentary, The Radiant Sun: Designer Ruth Adler Schnee, which will be shown at Cranbrook Art Museum in conjunction with the exhibition.

This exhibition is supported by the Graham Foundation for the Advanced Study in the Fine Arts. Ruth Adler Schnee is organized by Cranbrook Art Museum and curated by Ian Gabriel Wilson, the Jeanne and Ralph Graham Collections Fellow. The exhibition is made possible with support from the Clannad Foundation and the Maxine and Stuart Frankel Foundation. 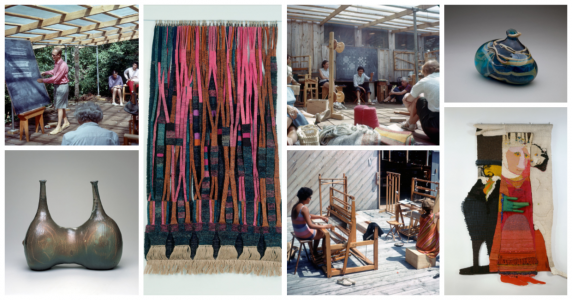 In the Vanguard: Haystack Mountain School of Crafts, 1950-1969 explores how an experimental school in rural Maine transformed art, craft, and design in the 20th century and helped define the aesthetics of the nation’s counterculture. The exhibition will open at Cranbrook Art Museum on December 14 and run through March 8, 2020.

The curators of the exhibition, Rachael Aruz and Diana Greenwold, will be joined by Paul Sacaridiz, Executive Director of Haystack Mountain School of Crafts to deliver a lecture at Cranbrook on December 14 at 2pm.

Founded in 1950, Haystack Mountain School of Crafts played a central role in the development of American art and craft.

The artists of the school’s early years—Anni Albers, Dale Chihuly, Robert Ebendorf, Jack Lenor Larsen, M.C. Richards, and Toshiko Takaezu—contributed to a dynamic community of craftspeople who broke new ground across a wide range of media. In the Vanguard is the first major museum exhibition focused solely on this school, and its insights look to revise the narrative of midcentury art and craft in America.

The exhibition was organized by the Portland Museum of Art, where it premiered this spring before traveling to Cranbrook Art Museum. It features more than 90 works of art, including textiles, ceramics, glass, metalwork, paintings, and prints, as well as newly discovered correspondence, photographs, brochures, posters, and magazine articles from the Haystack archive.

“Haystack, Cranbrook, and Michigan have enjoyed many connections over the years. Haystack’s founding director, Fran Merritt, taught painting at Kingswood School at Cranbrook for a year and during that time also taught at the Flint Institute of Arts (FIA) and later became its Director. Mary Bishop, Haystack’s benefactor, lived in Flint, Michigan, and studied with Cranbrook-trained artists at the FIA. Many future and former Cranbrook students and faculty studied or taught at Haystack, including Jack Lenor Larsen, Toshiko Takaezu, Fred Woell, and Harvey Littleton. Still today, the Academy of Art maintains a scholarship to Haystack for a graduating student.”

In the Vanguard presents the most comprehensive exhibition to date about one of the country’s most influential and lasting art institutions. It is a vital, compelling, and inspiring story about the pivotal imprint one small school in Maine has left on midcentury American culture.

The experimental nature of the Haystack experience, the effect of communal living within the natural landscape, and the powerful forces of the post-war art world all shaped Haystack’s teachers and students in profound ways. Textiles, ceramics, glass, metalwork, paintings, and prints on view will exemplify the breadth of innovative work that the Haystack experience made possible.

The exhibition includes artworks that demonstrate the innovative and collaborative nature of the Haystack experience and includes groupings of work to demonstrate how artists informed and critiqued one another and reveal unique instances of exchange fostered by the school’s environment. With seminal works of art by leaders of the midcentury studio craft movement, the exhibition asserts Haystack’s central role in national debates about the boundaries between art, craft, and design.

Additionally, archival material such as original correspondence, photographs, brochures, posters, and magazine articles will enrich the narrative of Haystack’s growth and transformation. Much of this material has never been published and is included in the first-ever scholarly catalogue about the school, In the Vanguard: Haystack Mountain School of Crafts, 1950-1969 which will be for sale at Cranbrook Art Museum.

In the Vanguard: Haystack Mountain School of Crafts, 1950-1969 is curated by Rachael Arauz and Diana Greenwold and is organized by the Portland Museum of Art, Maine. The project was supported by a generous grant from the National Endowment for the Humanities and a Craft Research Fund Grant from the Center for Craft. The Bloomfield Hills presentation is made possible, in part, with the support of the Maxine and Stuart Frankel Foundation and the Museum Committee and Art Members of Cranbrook Art Museum. 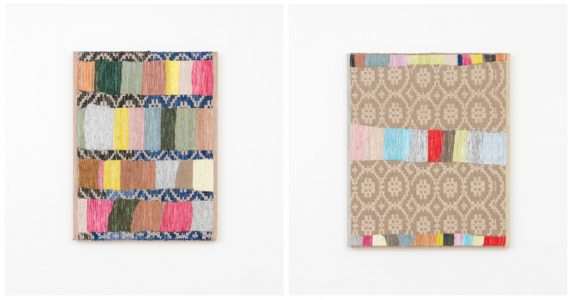 Also opening on December 14 is an exhibition of work by Christy Matson, a Los Angeles-based artist known for her painterly approach to textiles. Matson employs a hand-operated, computer-programmable Jacquard loom to create intricate weavings to which she often applies paint and other fiber techniques. She combines both hand and machine processes to mine her deep interests in collage and abstraction, which can be found in both historical ethnographic as well as modernist textile traditions. The exhibition will be open at Cranbrook Art Museum from December 14, 2019, through March 15, 2020. Matson will be on campus to deliver an artist talk on January 24, 2020, at 6pm.

The exhibition will feature two monumentally scaled tapestries that were originally conceived for a special commission for the U.S. Embassy in Ashgabat, Turkmenistan. Matson was struck by the affinities between the country’s textile traditions and the approach to color and composition in the functional textiles of Central Asia more generally and her own work. In this series of works, Matson continues her reflections on the gendered histories of weaving in conjunction with art historical approaches such as geometric abstraction.