Headspace: Jim Dine’s Glyptotek and The Detroit Printing Co-op: The Politics and the Joy of Printing Open This Month

Bloomfield Hills, Michigan, Sept. 15, 2020 — Cranbrook Art Museum opens two new exhibitions this month that will join the exhibition Shapeshifters: Transformations in Contemporary Art currently on display. The three exhibitions occupy the upper and lower galleries of the museum. The museum is now open late every Thursday until 8pm, with FREE admission all day. All visitors must preregister at cranbrookartmuseum.org. 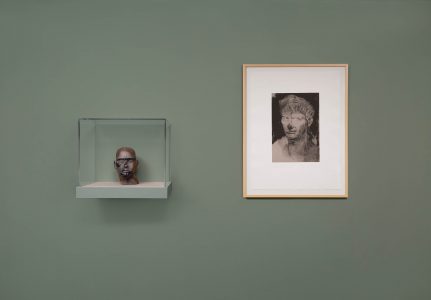 Inspired by a 1984 trip to Glyptothek, Munich’s museum dedicated to antique Greek and Roman sculpture, artist Jim Dine set out to create a book of prints inspired by the collection. He produced forty drawings uniquely designed to function as transparencies in the production of héliogravure prints, a printmaking process used to reproduce the earliest photographs. Dine’s prints exist both as individual works and as a collection, bound together in the oversized book, Glyptotek. According to Dine, each individual image in his Glyptotek can stand alone, but when viewed together they form a singular narrative “about learning from the Ancient World.”

Headspace pairs Dine’s prints with sculptural works by other artists from Cranbrook Art Museum’s permanent collection. These pieces from the twentieth century draw aesthetic parallels to Dine’s gestural renderings. Many of the selected busts mimic Dine’s ancient source material, while other works abstract the figure and reduce the form to a simple suggestion of what it represents. 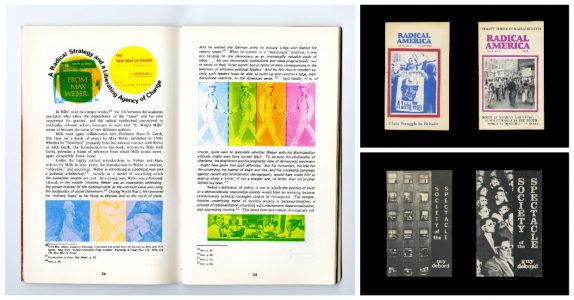 Clockwise, L to R: (1) Fredy Perlman, The Incoherence of the Intellectual, C. Wright Mills’ Struggle to Unite Knowledge and Action, Black & Red Press, Detroit, 1970 (2) Fredy and Lorraine Perlman printed Radical America from 1970–1977. The journal was birthed by members of the Students for a Democratic Society (SDS) in the 1960s and later adopted a thematic approach covering a wide range of socially progressive topics and leftwing political issues. (3) Left: Guy Debord, The Society of the Spectacle, Black & Red Press translation and edition, 1970; Right: Revised second edition of the book, 1977

Detroit Printing Co-op: The Politics of the Joy of Printing
Opens September 16, 2020

The social activism of the 1960s and 1970s gave rise to an “underground press,” which provided an alternative way to publish writings on a variety of issues, including Black empowerment, the quest for civil liberties and workers’ rights, anti-Vietnam war sentiment, and critiques of capitalism. This loose collection of independent magazines, alternative newspapers, fringe book publishers, and printing cooperatives, helped democratize publishing by making the necessary equipment and processes available to ordinary citizens.

Detroit became a hub for such alternative thinking and publishing, both before and after the wake of the citizen uprisings against institutionalized anti-Black racism in 1967 as well as on the basis of its strong union presence in manufacturing. In 1969, a group of friends, including Fredy and Lorraine Perlman, purchased a used industrial printing press and set up shop in the city, eventually calling themselves the Detroit Printing Co-op.

Rejecting the convention of privately owned property, the Co-op made its press available for like-minded others to use, and printed paid commissions to help cover expenses. The Co-op’s activities included Fredy and Lorraine Perlman’s book imprint called Black & Red, which published Guy Debord’s seminal text, Society of the Spectacle; printing one of the era’s defining magazines, Radical America; and collaboration with members of Black Star, the publishing arm of the League of Revolutionary Black Workers, and Detroit’s influential anarchist newspaper Fifth Estate.

“Some have compared recent social events with those of the 1960s. This show helps us understand some of the many issues that they were grappling with more than 30 years ago through the lens of the Detroit Printing Co-op, a small but prolific producer of urgent community messages,” said Andrew Blauvelt, Director of Cranbrook Art Museum. “Although the content of the work is political and academic and very much of its time, what is most striking are the printing and graphic design experiments that still appear fresh and contemporary years later.”

The story of the Detroit Printing Co-op underscores the power of the press to voice dissent, organize communities of like-minded individuals, and to articulate a case for social change. In an era dominated by the printed word and graphic communications, the Detroit Printing Co-op offered a small but potent example of such power, one that finds echoes not only in some of today’s pressing social issues but also in the resurgent interest in self-publishing and alternative printing methods in an age of screen-based social media.

Detroit Printing Co-op: The Politics of the Joy of Printing is based on a previous exhibition produced by 9338 Campau and subsequent research for a publication of the same title by Danielle Aubert, which was supported in part by the John S. and James L. Knight Foundation, Wayne State University, and AIGA. The exhibition was organized by Cranbrook Art Museum and was curated by Andrew Blauvelt and Danielle Aubert with exhibition design by Jon Geiger.