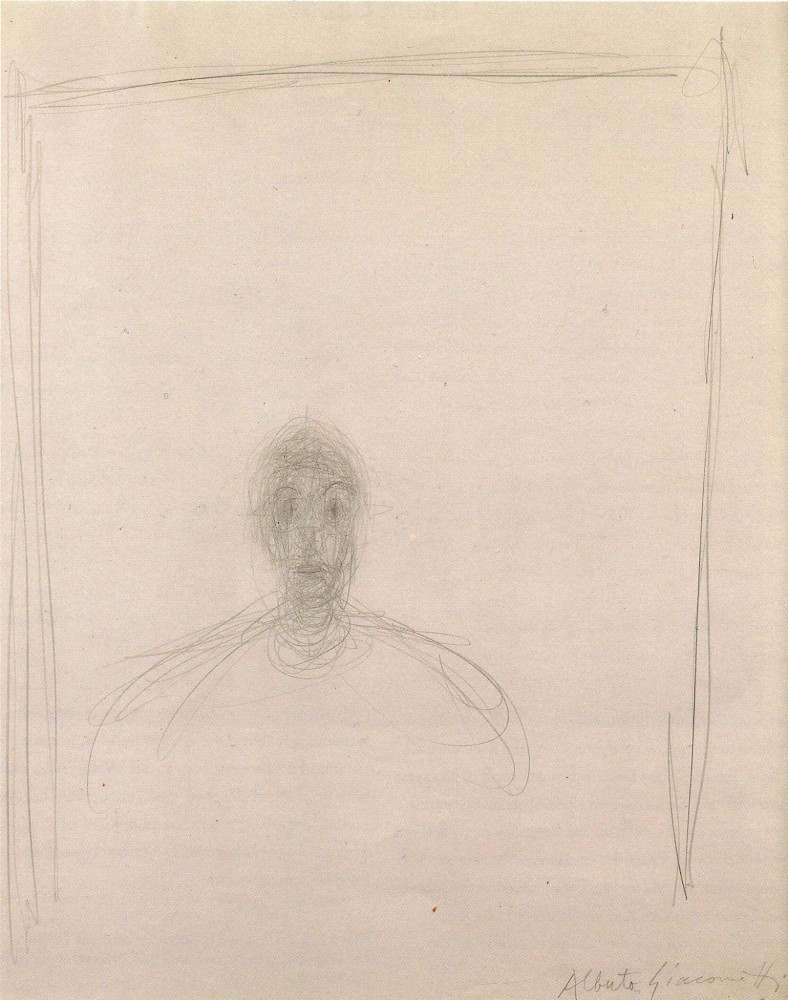 Known foremost as a sculptor, Alberto Giacometti’s artistic pursuits began with sketching as an adolescent, focusing primarily on portraiture. He was captivated by the human form, revisiting it constantly throughout his career, and his compulsion to draw from life ultimately caused a break from the Surrealists in 1935. Specifically, Giacometti found himself beguiled by the human head, a conventional subject he considered mystifying and artistically insoluble. The conclusion of World War II catalyzed a twenty-year period of intense productivity for the artist, and by the 1950s he had honed his focus on singular figures. His mature drawing style—exemplified in Head of Man—exhibits a frenetic exploration of the subject through continual, vigorous lines, suggesting an inner vitality emanating from the ominous eyes of his models. Giacometti believed that proper visual contact could only be accomplished by observing an individual head-on and looking directly into the eyes; the artist himself noted that although the head was his greatest interest, “I think I must now succeed in building as precisely as possible the eye. And if I had that…the root of the nose, the starting point for the eyes, the curve of the eye itself, everything would flow from there.

”Giacometti was also concerned with the perspective from which his subjects were viewed, and considered spatial orientation in every medium he explored. As demonstrated by the framed white void enveloping his figure in Head of Man, the purview of subject to artist is indicated by scale, and is crucial to the comprehension of the piece. By placing the subject at an insurmountable distance, devoid of context, it can emerge within the spectator’s own reality and become an impartial vessel for the viewer’s own projections. Unlike many of his contemporaries, Giacometti was uninterested in psychology, wishing only to convey the inner life force of his subjects, and he consistently employed negative space as a contrast against the pulsating energy of man.