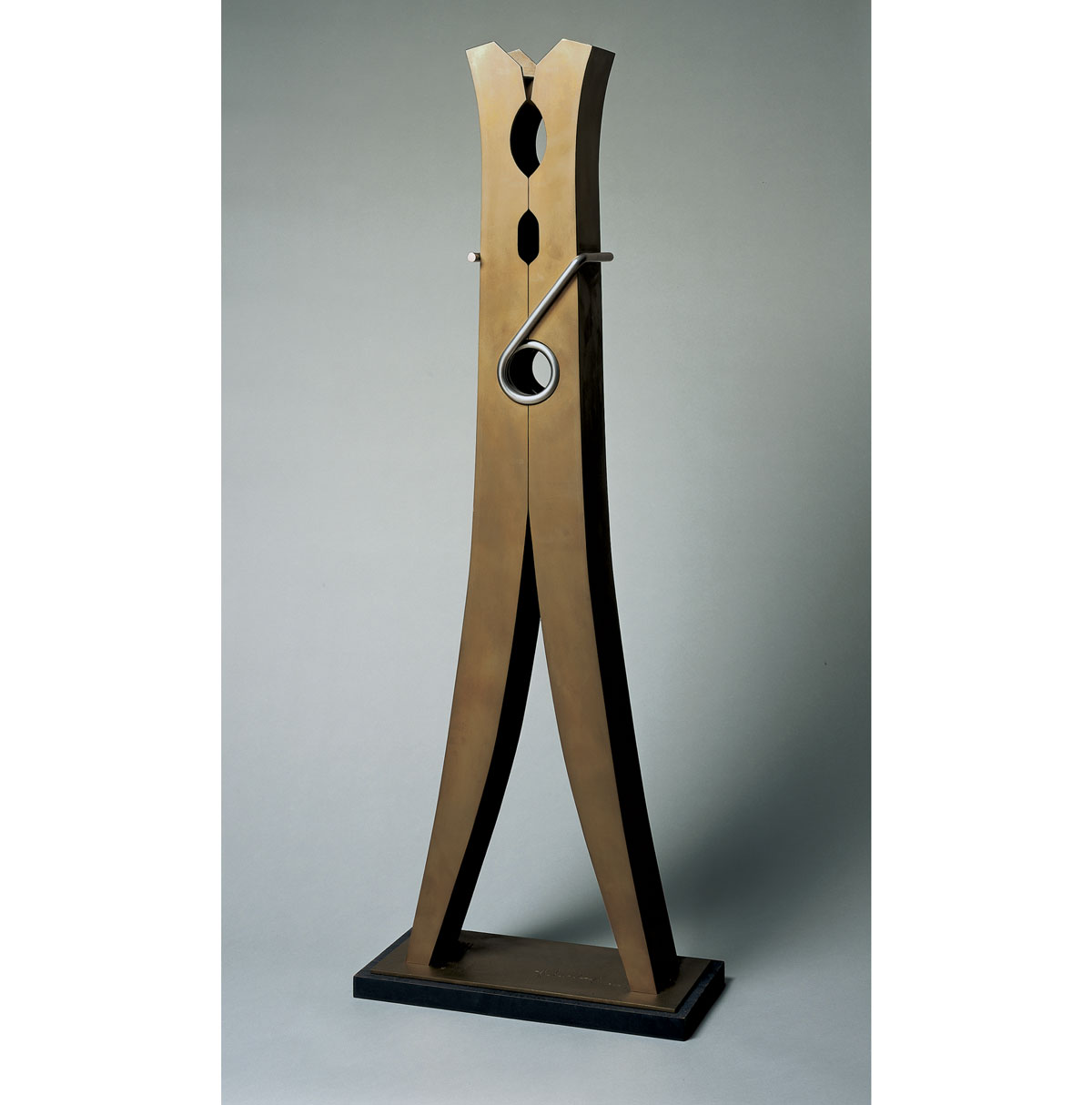 Claes Oldenburg is the most important sculptor associated with American Pop art. Although Pop art was diverse in expression, an attraction to the ordinary things of a consumer society bound together artists as different as Roy Lichtenstein, Robert Rauschenberg, James Rosenquist, Andy Warhol, and Oldenburg. Presenting the artifacts of popular culture in a straightforward manner, these artists were initially suspected of forfeiting any imaginative transformation of their sources. But Pop artists always altered the object at hand—be it a comic strip, a billboard, a media photograph or soup can. What emerged in their works were highly personal meditations instilled with ironic critiques of modern American culture. Since 1969, Oldenburg has produced over two dozen Large-Scale Projects, many of them in collaboration with Coosje van Bruggen. Located in cities of the United States and Europe, these “colossal monuments” include a flashlight, baseball bat, garden hose, binoculars, and shuttlecocks.

Oldenburg’s “things” are not literal reproductions of familiar objects. With expansions in size, unexpected use of materials, and subtle simplifications of form, Oldenburg created things of the imagination, not of the five-and dime. The wonderment and wit of Oldenburg’s art lies in the protean nature of the object’s identity. It always appears to be much more than what it really is. Such is the case with Oldenburg’s bronze Clothespin-Four Foot Version. Standing proudly on its rectangular base, it is closely related to the forty-five-foot-tall Clothespin in downtown Philadelphia that was inaugurated on the eve of the Bicentennial celebrations in 1976.

While flying over Chicago in 1967, Oldenburg held up a wooden clothespin to his window and matched it to the skyscrapers below. Upon returning to New York, he prepared a drawing of a skyscraper in the form of a clothespin for a commissioned cover of Artforum. Entitled Late Submission to the Chicago Tribune Architectural Competition of 1922,

Oldenburg considered his scheme a fitting solution: “Perceiving in it a certain Gothic character, I visualized it as a substitute for the Chicago Tribune Tower on Michigan Avenue.”

In 1972, the clothespin changed its geographical identity when it was used for a poster and an editioned screenprint designed in conjunction with the exhibition Object into Monument at the Philadelphia Museum of Art. When developers in Philadelphia commissioned Oldenburg in 1974 to create a Large-Scale Project, it was no surprise that they chose the clothespin.

On its way from Chicago to Philadelphia between 1967 and 1974, Oldenburg’s clothespin was realized in a variety of media and scales. There are several finished drawings, a cardboard maquette with the sides of the clothespin open, and an original Cor-Ten steel maquette for the Philadelphia commission. The clothespin was also fabricated in two sets of editioned sculpture: a 6-ft. version in Cor-Ten steel for outdoor locations, and a 4-ft. version in bronze for indoor presentation. The first of the bronze editions entered the Shuey Collection in 1974.

Oldenburg saw the Philadelphia Clothespin, in its shape and “crack” down the middle, as a modern updating of the Liberty Bell. He further associated the clinging forms of the Clothespin with Constantin Brancusi’s sculpture The Kiss in the city’s museum, and with Philadelphia’s identity as “The City of Brotherly Love.” He even felt that the stainless steel spring, in a fitting nod to the American Bicentennial, resembled the numerals 7 and 6. Oldenburg always wanted his Large-Scale Projects to accommodate the history of their locations.

Through changes in material, scale, and context, an Oldenburg clothespin, like all of his objects, takes on multiple identities. The clothespin in the Shuey Collection is neither the architectural clothespin of Chicago nor the erotic/patriotic clothespin of Philadelphia. It is more human in scale, with legs astride and arms folded in the confident pose of a Greek sculpture fashioned in the “noble material” of bronze.