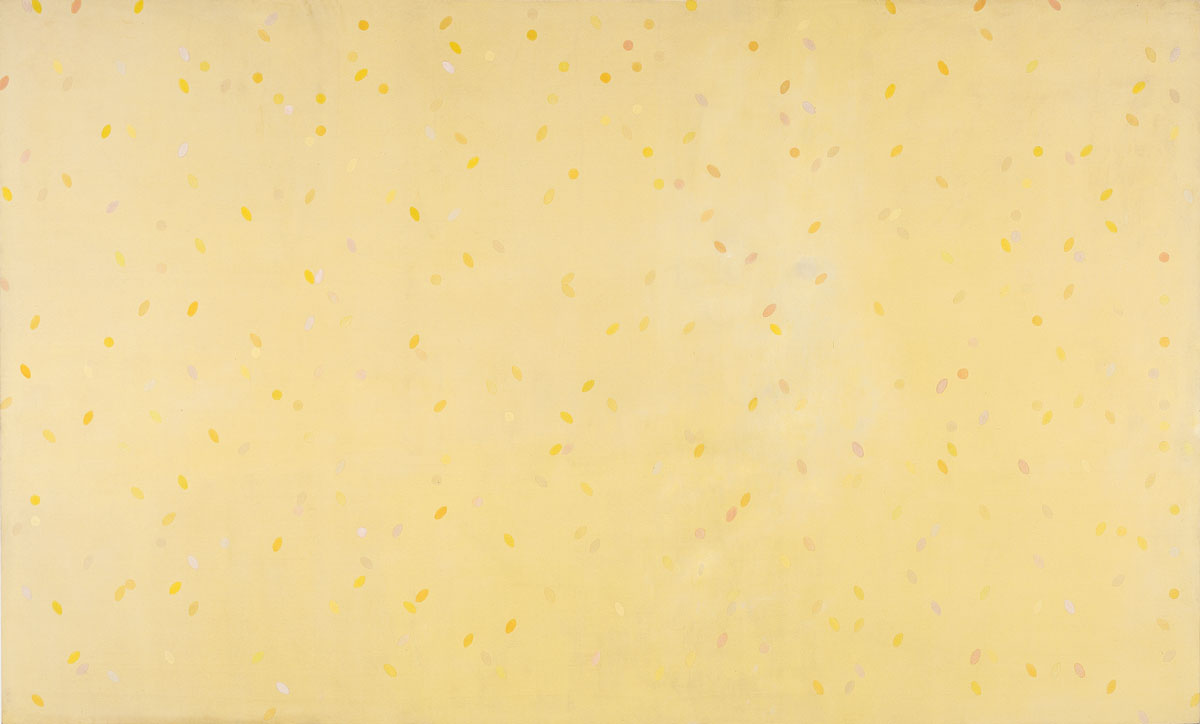 The use of geometric patterns in bright, often contrasting colors, which produce a sense of visual stimulation and palpitation, was a hallmark of Op art painters in the 1960s, whose practitioners included Larry Poons and artists such as Richard Anuszkiewicz, Bridget Riley, and Victor Vasarely. In Poons’ painting Wildcat Arrival, a loosely slanting grid of ochre, salmon, and lemon covers a larger-than-life canvas of gold; its small dots and ellipses seem to pulsate. One of Poons’ early viewers told the artist that looking at his paintings often produced a sensation of after-images on the retina, and Poons tried to reproduce these effects in order to create the feeling of after-images while viewing. Poons worked in the lower-keyed, richly saturated hues used by painters he admired such as Morris Louis and Jules Olitski, thus combining the techniques of Op art with the palette of the movement that seemed its antithesis, Color Field painting.

Though evenly arranged in a geometric over-painted pattern, and composed of complementary hues, the dots alternate irregularly-some are circular, some elliptical–and no detectable pattern of color arrangement can be discerned. Poons had studied music at the New England Conservatory of Music from 1955-57 before turning to art, and was deeply influenced by the aleatory compositional procedures of John Cage. Cage’s use of chance as a determining factor in composition and the desire to find order within randomness indeed seem to be organizing principles of Wildcat Arrival. And, like the “all-over” quality of work by abstract expressionists such as Jackson Pollock, this painting appears to extend beyond its edges, with some dots sliced off. As Poons said, “The edge defines, but does not confine, the painting.”

Poons saw a Barnett Newman exhibition in 1959 and decided to become a painter, studying briefly at Boston’s School of the Museum of Fine Arts. His first pictures featured configurations of small dots, evenly sized; he then moved to painting ellipses and eventually a combination of the two. These early works were painted on evenly stained grounds, but around the time of Wildcat Arrival, the artist began to use more painterly, swirling washes of color under his elusively structured grids. Poons stressed the intuitive nature of his method: “The dot pictures were my best attempt to learn how to paint. I believe my coming up with the dots had something to do with what was in the air at that time: I had to keep it simple.” His later introduction of ellipses was “an attempt to imply direction–left, right–rather than the static.” In 1969, while Op art was still popular, Poons began working in a more tactile and spontaneous manner-pouring, dripping, and even throwing thick paint in muted colors onto his canvases. Though his working methods changed over the course of his career, the artist’s oeuvre is marked by a persistent, compelling concern for the ways in which the formal structure of a painting can both harness and effect expression through the use of color.