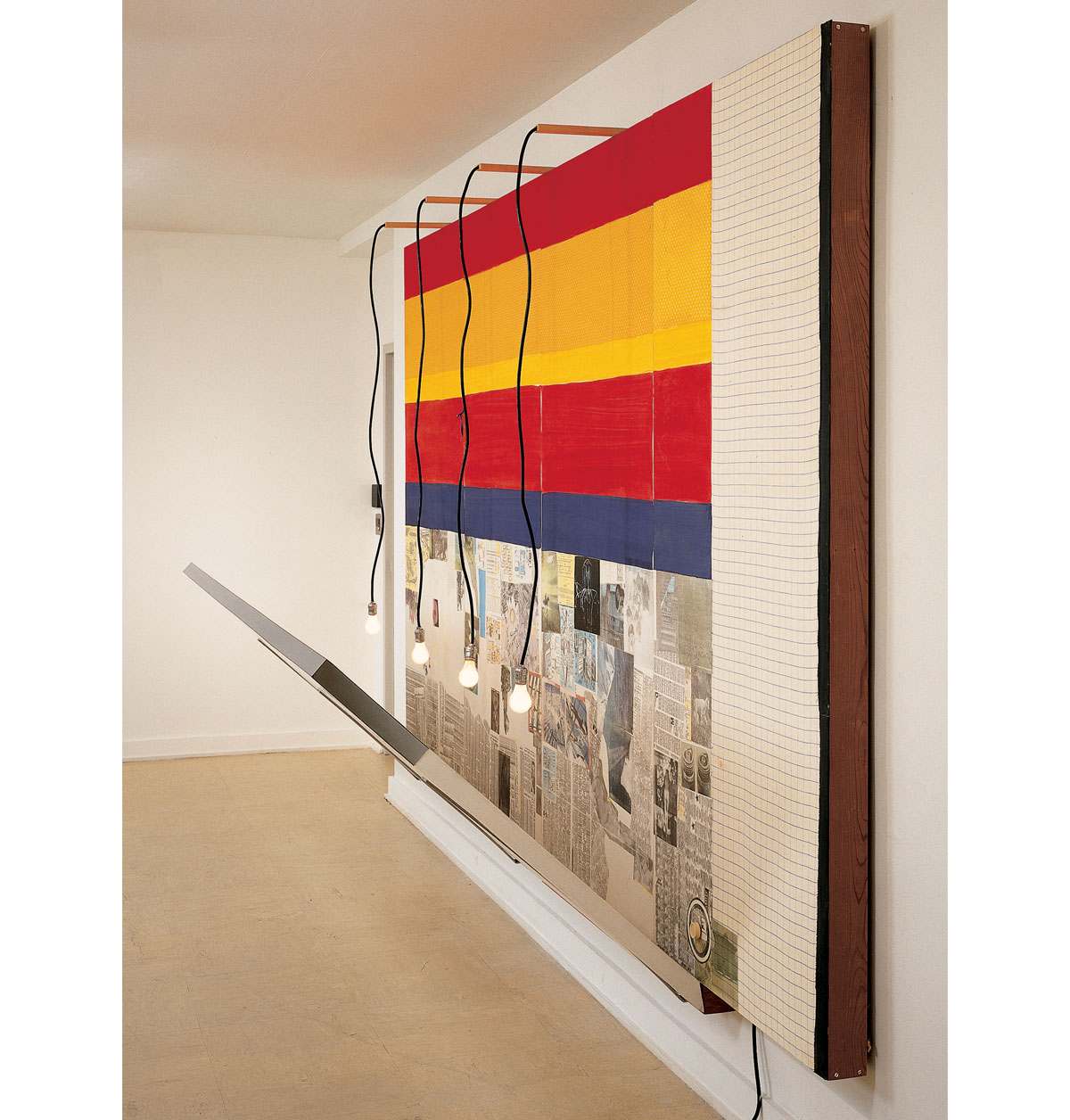 Robert Rauschenberg created some of the most ambitious art of the twentieth century using the bric-a-brac of his everyday world. With detritus collected from New York City streets—fabrics, tin cans, newspapers, bird wings, tires, magazine ads, pillows, electric fans, and twisted metal—Rauschenberg represented the emerging consumer culture of the 1950s while radically transforming the future of artmaking. Rauschenberg collapsed age-old hierarchies about subject matter and materials, putting high art reproductions next to comic book characters and juxtaposing abstract expressionist brushstrokes with mechanically printed signboard fragments. When in the early 1960s Rauschenberg began to concentrate on found imagery in silkscreen paintings and transfer drawings, he continued to let the look of the quotidian world assist in the visual effect of the piece. Moon Burn represents this well. It teems with found imagery and is a wonderful example of Rauschenberg’s relentless exploration of new materials, structures, and technologies.

Rauschenberg was born in the rural refinery town of Port Arthur,Texas. After a stint in the Navy in California in the forties, he pursued formal study at the Kansas City Art Institute, the Academie Julian in Paris, and Black Mountain College with Josef Albers. Rauschenberg came of age artistically in a New York scene devoted to abstract expressionism; he was closely involved with de Kooning and others, but also migrated towards a new constellation of artists whose roots lay in the theories of Marcel Duchamp and in the practices of experimental composer John Cage. The artists in the Duchamp-Cage circle explored passages of the vernacular world—found sound for their music, discarded objects for their art, and prosaic movement for their dance. Unlike the reigning abstract expressionists who generated content from a psychic excavation of the interior self, these young artists abandoned what they viewed as egocentric control in favor of reorientations of found information.

Moon Burn is made up of four vertical wood panels, in which the array of found imagery occupies the bottom half of the composition while horizontal bands of colored fabric link the four panels across the top. Angling out from this two-dimensional medley is another support holding reflective material that picks up the blurred colors and forms of the opposite collage. Like Plato’s “Allegory of the Cave,” Rauschenberg shows us diminishing degrees of representation as we move away from the real. Four light bulbs dangle down from the top of the large structure illuminating the interior as if a work-site for some hieroglyphic excavation. Indeed, the images call for specialized readings and interpretations as their symbolism can only be understood in the context of the artist’s entire oeuvre where these particular motifs recur. There are a number of newspaper pages displaying information from the New York Stock Exchange. These rows and columns of numbers create grids that reinforce the geometric order of the overall composition, and echo the long stretch of checkered cloth at the far right. Along with images of officious looking government buildings, they also refer to Rauschenberg’s longstanding interest in symbols of commerce and politics. On the other hand, pictures of animals, including a mountain goat, which recalls Rauschenberg’s well-known taxidermied Angora goat forced through a rubber-tire in Monogram of 1955-58, look to personal history by signaling his childhood with its menagerie of barnyard pets.

Moon Burn is like a mini-retrospective for it also includes a reproduction of a painting showing a reclining female nude, a high art staple in Rauschenberg’s repertoire of signs. His common depiction of scantily clad male athletes as covert signs from a homosexual iconography, initiated during the repressive decade of the 1950s, appears here in a picture of a team of trapeze artists. Finally, Rauschenberg’s optimism about technology finds reference in Moon Burn’s series of technical drawings. Even the title might refer to the United States space program, a subject he addressed in numerous silkscreens from the seventies. For almost fifty years, Rauschenberg has shown us what it looks and feels like to be living in modern America. His art is testimony to the role of the artist as social and historic commentator. Moon Burn is no exception.