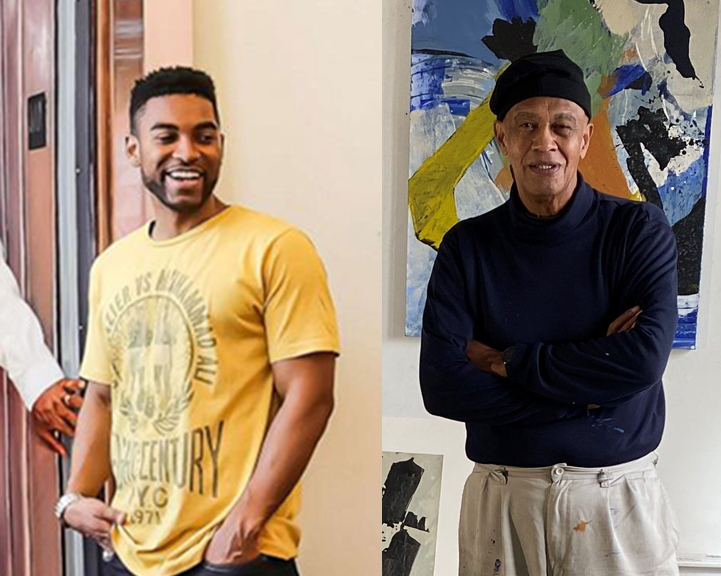 Join us for a conversation between abstractionist painter Allie McGhee whose retrospective Allie McGhee: Banana Moon Horn closes on Sunday, March 20, and figurative painter Mario Moore, whose work is on view in the group exhibition Homebody through June 19. The pair will be introduced by Laura Mott, Chief Curator of Cranbrook Art Museum.

McGhee and Moore will discuss painting, their cultural influences, and the transformative power of art in society now, and in the late 1960s when McGhee emerged as a leader of the Black cultural community in Detroit. The talk will be followed by a listening experience curated by Allie McGhee in the galleries.

Admission to the lecture is free. Gallery admission is always free every Thursday. Can’t make it in person? Watch the live stream through the button above.

Allie McGhee (b. 1941) lives and works in Detroit, Michigan, and has been an important pillar of the Detroit art scene for more than five decades. In addition to Banana Moon Horn at Cranbrook Art Museum, his work has been the subject of recent solo presentations including Allie McGhee: The Ritual of The Mask at the Belle Isle Viewing Room; and Cosmic Images 2000, University of Michigan as well as in several major group exhibitions including Harold Neal and Detroit African American Artists, 1945 Through the Black Arts Movement, Wayne State University and Eastern Michigan University; and Enunciated Life at the California African American Museum, among others. His work is included in numerous public collections including Detroit Instite of Arts; Mott-Warsh Collection, Flint; St. Louis Museum of Art; Studio Museum in Harlem; and Toyota City Hall, Toyota, JP. McGhee is represented by Harper’s gallery in New York and has received a lifetime achievement award by the Festival African American Art and Culture by the Detroit City Council.

Mario Moore (b. 1987) lives and works in Detroit, Michigan. He received a BFA in Illustration from the College for Creative Studies (2009) and an MFA in Painting from the Yale School of Art (2013). His work is in several public and private collections which include the Detroit Institute of Art, The Studio Museum in Harlem and Princeton University Art Museum. Moore’s work has been featured in numerous exhibitions including The Smart Museum, Chicago; the Smithsonian Museum traveling Sites Exhibition; Xavier University Art Gallery, New Orleans; the Urban Institute of Contemporary Art, Grand Rapids; David Klein Gallery, Detroit; and the Jeffrey Deitch Gallery, New York. His solo survey exhibition Enshrined: Presence + Preservation was held at the Charles H. Wright Museum of African American History in 2021 and is on view through October 2, 2022 at the California African American Museum.