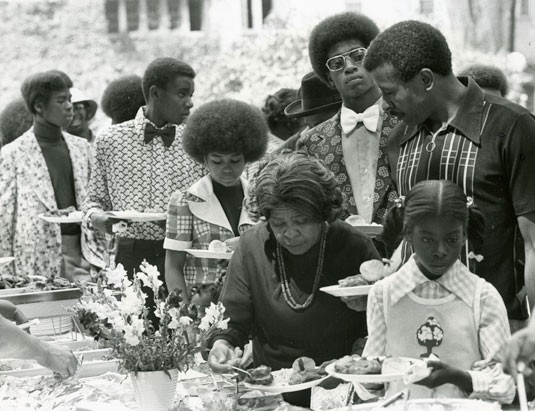 50 Years Strong
The Evolution of HUB at Cranbrook

Horizons-Upward Bound, known as HUB, has its roots in a partnership with Cranbrook Schools that began in 1965.  Originally named Horizons, it was an experimental summer enrichment program to provide a private school experience on the Cranbrook campus for low-income boys from Detroit.  Funded by a three-year grant from the Ford Foundation, the first class consisted of 52 boys from three junior high schools in Detroit. The following year, Horizons incorporated the U.S. Department of Education’s Upward Bound program and soon was renamed Horizons-Upward Bound.

Over the past fifty years, HUB has evolved into a year-round program which prepares both boys and girls with limited financial opportunities to enter and succeed in post-secondary education.  This exhibition sheds light on the history of the program and its continued affiliation with Cranbrook Schools and highlights key individuals and events that have helped make it the successful legacy it is today including the program’s directors Ben Snyder, Bill Washington, Eddie Green, and current director Darryl Taylor.  Through news clippings, program invitations, brochures and newsletters, student publications, and historic photographs, the exhibition presents a chronological history of the multi-faceted academic enrichment program known as HUB.

50 Years Strong: The Evolution of HUB at Cranbrook was organized by the Cranbrook Center for Collections and Research and curated by Head Archivist Leslie S. Edwards. The Center, which includes Cranbrook Archives, is supported, in part, by the Fred A. and Barbara M. Erb Family Foundation, the Kresge Foundation, the Towbes Foundation of Santa Barbara, California, and many generous individual donors.