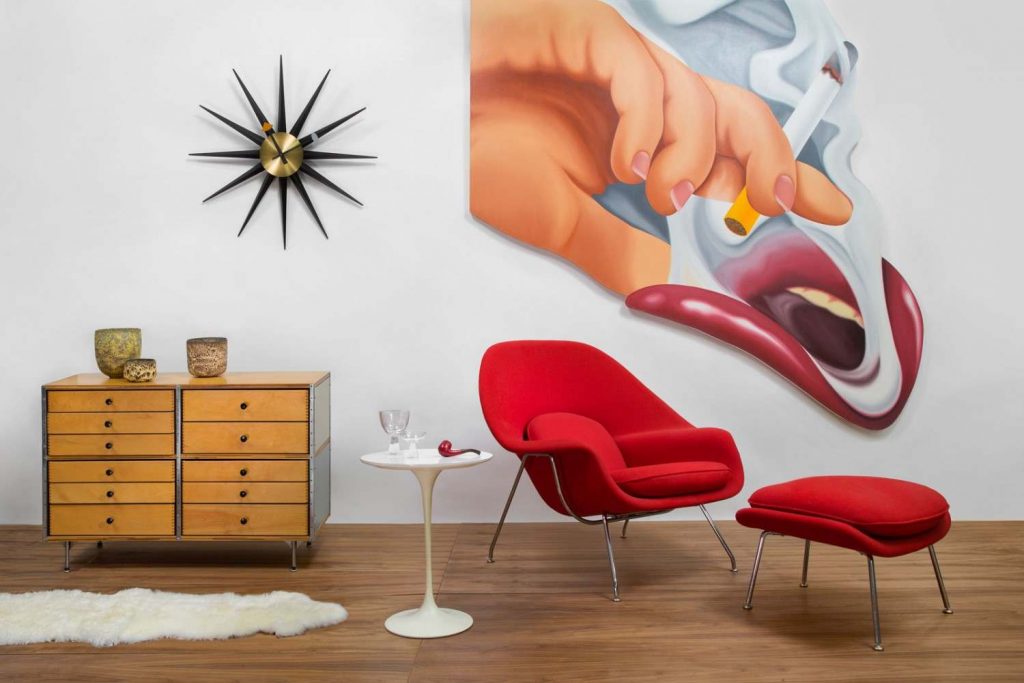 Devoted to the Arts and Crafts movement that inspired Cranbrook’s founders, George and Ellen Scripps Booth, in the early 20th century, The Naturalist’s Athenaeum explores the ethos of the movement and the study of the natural world. The athenaeum, a sanctuary reserved for literary and scientific learning, is inhabited by artworks, handicraft objects, rare books and natural specimens that speak to a mindset that champions the intricacies of nature and human skill without the interference of technological production and artificiality.

Evoking mid-century modernism in America birthed at Cranbrook Academy of Art, The Bachelor Pad consists of two spaces: an exterior courtyard sculpture garden and an interior environment indicative of an idealized unmarried man. This space contrasts a familiar design narrative with a subtext of how a new modernist masculinity was constructed through consumer goods. The room is populated with furniture by modern masters such as George Nelson, Eero Saarinen and Charles Eames and seemingly benign objects—ashtrays, tumblers, cocktail shakers—that were propagated by magazines like Playboy as assertions of maleness.

A look into the experimental living environments of the 1970s, The Cosmic Cave is an immersive experience that takes its inspiration from speculative thinking of the era, including time travel, transcendental meditation, and the Afrofuturist philosophies of Sun Ra. A psychedelic living environment by Cranbrook alum Urban Jupena (Cave Rug, 1970) envelops the space and is accompanied by artworks ranging from ancient Egyptian artifacts to a sound work by contemporary artist Ingrid LaFleur. The space is a physical experiment in collapsing the past, present, and future.

The exploration of how an object’s form could be derived from its content or meaning, referred to as “product semantics,” was pioneered at Cranbrook in the 1980s. In A Semiotic Funhouse, pluralistic notions of taste are addressed in a room of furniture, graphics, and product models dedicated to the postmodernist sensibilities of historical reference, linguistic play, geometric formalism, and the anti-aesthetic of bad taste.

This exhibition is the third installment in a series of shows, including the Cranbrook Hall of Wonders and The Cranbrook Salon, which showcase works from our collections presented through contemporary interpretations of historical museum display techniques.

Cranbrook Time Machine: Twentieth-Century Period Rooms was organized by Cranbrook Art Museum and curated by Andrew Blauvelt, Director; Laura Mott, Curator of Contemporary Art and Design; and Shelley Selim, former Jeanne and Ralph Graham Assistant Curator. The exhibition was designed by Mark Baker, Head Preparator and Exhibition Designer. Cranbrook Art Museum is supported, in part, by its membership organization, ArtMembers@Cranbrook; the Museum Committee of Cranbrook Art Museum; and the Michigan Council for Arts and Cultural Affairs and the National Endowment for the Arts.

Related Past Events
[This Event Has Passed] Performance: “Into the Darkness” by Ingrid LaFleur