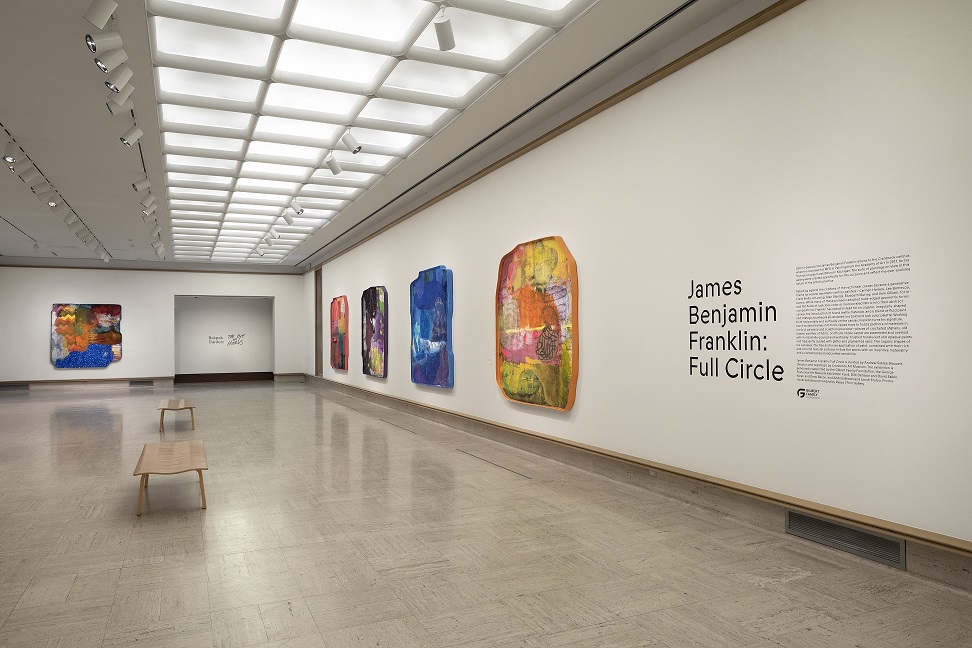 Rebelling against the confines of the rectilinear canvas became a generative theme for several twentieth-century painters—Carmen Herrera, Lee Bontecou, Frank Stella, Blinky Palermo, Alan Shields, Kenneth Noland, Elizabeth Murray, and Sam Gilliam, for instance. While many of these pioneers adopted hard-edged geometric forms and flat fields of judicious color for their abstract compositions, Detroit-based painter James Benjamin Franklin has opted instead for an organic, irregularly edged canvas, the introduction of found textile materials, and a blend of fluid paint and strategic brushwork all rendered in a bold and lush color palette.

Turning the canvas into a thick-lipped, albeit vertically oriented, “tray” allows Franklin to hold a plethora of materials in a mix of painterly and sculptural practices—pieces of crochet afghan, old towels, swathes of fabric, or offcuts of pile carpet are assembled and overlaid with poured and brushed paint and occasionally dusted with glitter or sand. The organic shapes that he gives the canvases, the free and loose application of paint, combined with their rich and colorful textural surfaces imbue the works with an inventive materiality and a contemporary handcrafted sensibility.

For his first solo museum exhibition in Detroit, Franklin returns to the Cranbrook campus, where he studied at the Academy of Art, to create an entirely new body of work that further develops these exciting themes and innovative processes.

James Benjamin Franklin (b. Tacoma, Washington) is an artist based in Detroit, Michigan. His distinctive canvases push the boundaries between painting and sculpture. Franklin received his BFA from Art Center College of Design, Los Angeles, in 1999 and his MFA in Painting in 2017 from Cranbrook Academy of Art, Bloomfield Hills, Michigan. His work has been featured in exhibitions at the Kentucky Museum of Art and Craft, Louisville; FRONT International, the Cleveland Institute of Art, Ohio; Night Gallery, Los Angeles; the Museum of Contemporary Art, Detroit; and Proyectos Monclova, Mexico City. His work has been featured in Bomb Magazine, Galerie Magazine, Hyperallergic, and the New York Times. The artist is represented by Reyes | Finn Gallery, Detroit, Michigan.