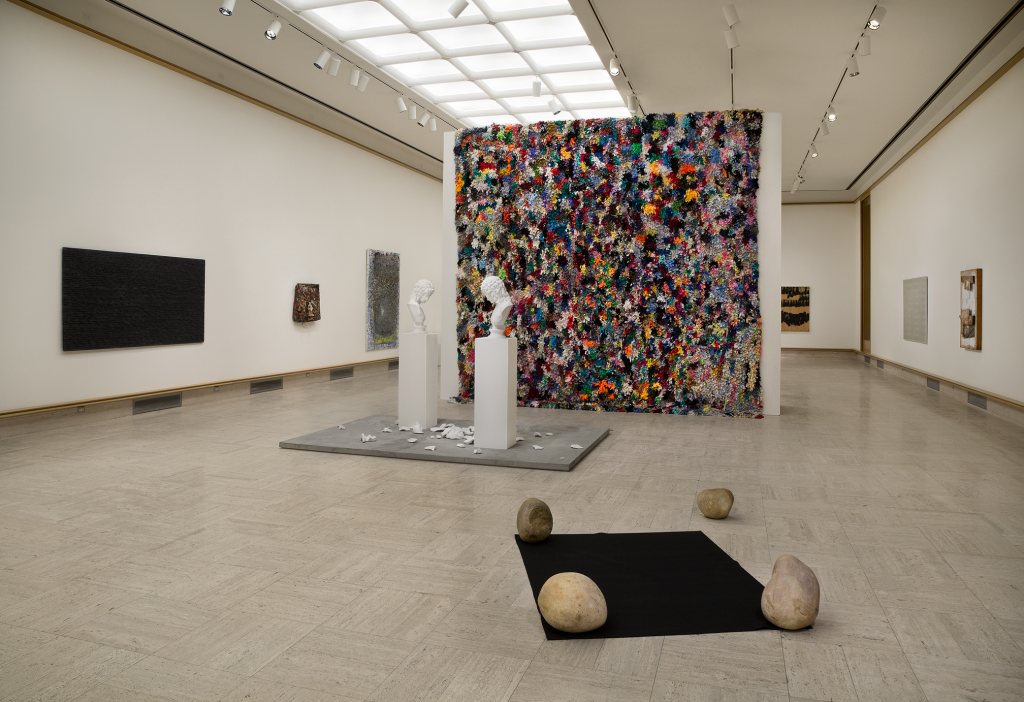 Belkis Ayón, Ya estamos aquí (We are already here), 1991, collograph. Photography by José A. Figueroa, courtesy of the Belkis Ayón Estate, Havana, Cuba.

Tiff Massey, White Out (Green), 2018, fiber and rust. Courtesy of the artist and Library Street Collective

Landlord Colors: On Art, Economy, and Materiality reconsiders periods of economic and social collapse through the lens of artistic innovations and material-driven narratives. It examines five art scenes generated during heightened periods of upheaval: America’s Detroit from the 1967 rebellion to the present; the cultural climate of the Italian avant-garde during the 1960s-1980s; authoritarian-ruled South Korea of the 1970s; Cuba since the collapse of the Soviet Union in the 1990s to the present; and contemporary Greece since the financial crisis of 2009. Featuring more than sixty artists, Landlord Colors is a landmark exhibition, publication, and public art and performance series. While the project unearths microhistories and vernaculars specific to place, it also examines a powerful global dialogue communicated through materiality. Landlord Colors discovers textured and unexpected relationships between these artists whose investigations share themes of ingenuity, resourcefulness, and resistance.

Virtual Tour of Landlord Colors: On Art, Economy, and Materiality

Material Detroit is a series of public programs around Detroit that complement the themes and artists of the Landlord Colors exhibition. This robust public art and performance series is a collaboration between three Detroit curators and institutions: Laura Mott, Senior Curator at Cranbrook Art Museum; Taylor Renee Aldridge, Founder of ARTS.BLACK; and Ryan Myers-Johnson, Director of Sidewalk Festival. Material Detroit will engage residents as it connects art to vortexes of history and contemporary life across Detroit during summer 2019.

Landlord Colors: On Art, Economy, and Materiality is organized by Cranbrook Art Museum and curated by Laura Mott, Senior Curator of Contemporary Art and Design. The project is generously supported by the Andy Warhol Foundation for the Visual Arts, the Maxine and Stuart Frankel Foundation, The John S. and James L. Knight Foundation, The National Endowment for the Arts, and donors to the Detroit Initiatives Fund for Cranbrook.