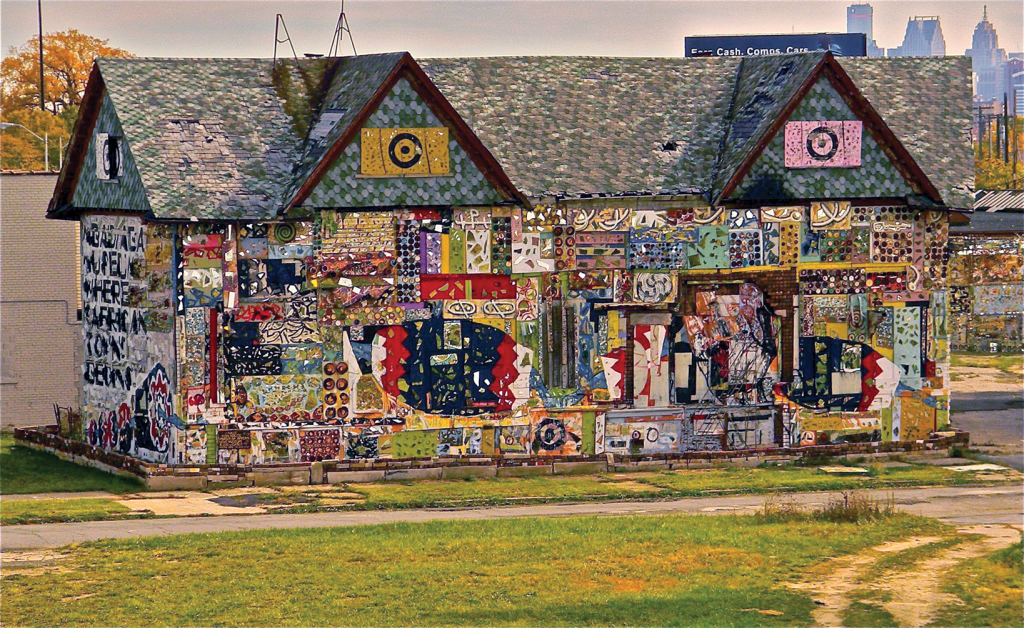 Material Detroit is a free performance and public art series that complements the exhibition and publication, Landlord Colors: On Art, Economy, and Materiality. Sited in Detroit and created in partnership with ARTS.BLACK and Sidewalk Detroit, it is the activation of ideas that leap off the pedestal or page and become voices, movements, and experiences.

A fleet of abandoned boats suspended in a warehouse along the Detroit Riverfront; an apartment in the Eastern Market neighborhood reconceived as a sensory-rich environment of black ceramics, charred wood, and molten glass; a hoodie in the North End with twenty-five-foot-long arms attached to flagpoles raised and lowered at dawn and dusk each day; an epic performance of Detroit-area choirs taking form as an expanded infinity sign. This summer, these and many other free public installations and performances will punctuate Material Detroit, taking the art of Landlord Colors beyond the museum and into the city.​

Scott Hocking’s monumental installation near Atwater Beach on the Detroit Riverfront utilizes a collection of the metaphorical bones of Detroit’s once-prosperous economy—the many boats abandoned throughout the city. Theatrically presented as a suspended fleet, Hocking applies “Bone Black” paint to the boats, an industrial pigment from animal bones that has been produced in Detroit since the 19th century.

Iron Teaching Rocks How To Rust is a spectacular city-block-sized installation by Olayami Dabls that has been a cultural nexus in Detroit since the late 1990s. Detroit artist Elizabeth Youngblood’s exhibition serves as a momentary companion to this creative pillar. The interdisciplinary and perpetually curious Detroit-based artist Elizabeth Youngblood takes up matter in this exhibition in an effort to make sense of things; to identify and discern importance and order. For mat|ter, n., v., Youngblood continues her practice of employing repetition and deference toward a range of mediums—fiber, mylar, graphite, paper and ceramic—to attend to both the matter(ing) of material and the concerns she has regarding organic environments and our relationships to them.

Havana-based Afro-Cuban artist Susana Pilar will draw upon a true story from Detroit’s 1967 Rebellion. Through a collaboration with local musicians, she will create a performance to honor the music of The Dramatics, whose founding member Cleveland Larry Reed survived the 1967 police siege on The Algiers Motel.

Invested in ritual and monastic practices, Billy Mark creates a site-specific installation in his neighborhood of Detroit’s North End. A handmade hoodie with twenty-five-foot arms is attached to three flag poles. Each morning for forty days, Mark raises the hands of the sweatshirt at dawn and lowers them at dusk. Visitors are invited to put themselves inside the garment.

Sterling Toles will enact a performance of a sound work that sources news coverage from the Detroit’s 1967 Rebellion in tandem with Sterling’s distinct instrumental music and narration of his father’s personal history. The project is sited in Gordon Park, the historic location where the uprising began and will be accompanied by a series of discussions led by curator Taylor  Renee Aldridge.

The Fringe Society (Ash Arder & Levon Kafafian) present Xylem X, an immersive installation and portal into the topographic layers of life on a faraway, futuristic planet. How are peace and power negotiated in a society run entirely by plants? Utilizing a colorful alley as its platform, the work will examine fiber, materiality, and the urban built environment as it relates to identity, economic security, and the pursuit of Utopia.

Big Red Wall Dance Company, led by choreographer Erika Stowall, will present an original place-based movement work in Detroit’s 250-acre Eliza Howell Park, exploring the Black female body’s relationship to Detroit greenspace and issues of security and safety in public space. The work will feature live music accompaniment and selections from guest choreographers based in Detroit. This event is presented by Sidewalk Detroit as part of the SideTrails Artist Residency Program.

Jennifer Harge’s Fly | Drown at the Detroit Artists Market recreates African-American interior domestic space through vernacular objects. The installation is accompanied by a series of performances and salon-style talks that will serve as platforms for Black womxn to explore their sovereignty. For schedule and to RSVP, click here.

Legendary artist Michelangelo Pistoletto explores the cyclical nature of life through an ongoing manifesto-driven series titled Il Terzo Paradiso (The Third Paradise). The work takes the form of a configured symbol of the mathematical infinity sign into three connected circles that represent nature and artifice being mediated by a generative new humanity. In Detroit, The Third Paradise will be created through an epic performance of Detroit area choir members orchestrated in the shape of the symbol.

The Landlord Colors symposium undertakes the three central thematic components of the exhibition—art, economy, and materiality. Senior Curator Laura Mott and co-curators of Material Detroit will be joined in a series of panels and presentations by visiting artists, designers, and thinkers addressing four prompts: History as Material; Body as Material; City as Material; and Material as Material. The symposium includes a cash bar reception following the talks.

The project is generously supported by the Andy Warhol Foundation for the Visual Arts, the Maxine and Stuart Frankel Foundation, The John S. and James L. Knight Foundation, The National Endowment for the Arts, and donors to the Detroit Initiatives Fund for Cranbrook.