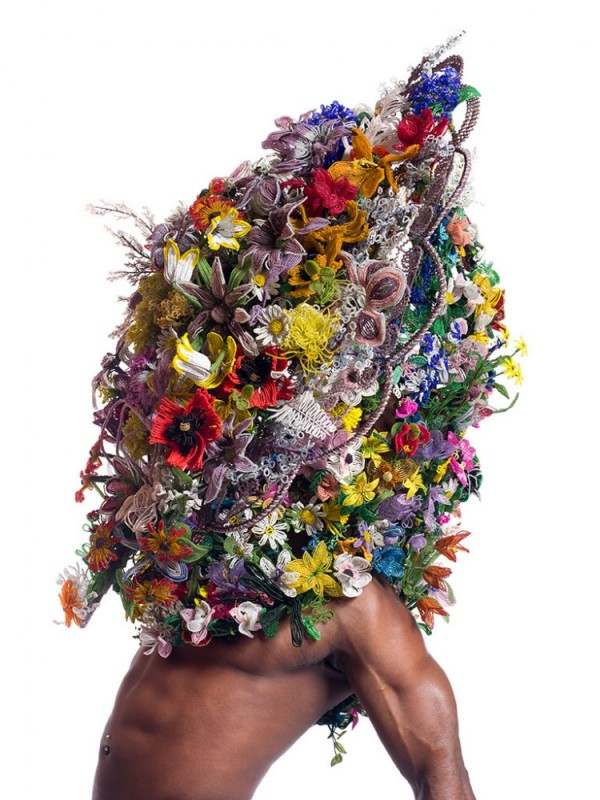 In the spring, summer, and fall of 2015, Cranbrook Art Museum and Detroit served as the backdrop for Nick Cave’s most ambitious project to date – Nick Cave: Here Hear. At the invitation of Cranbrook Art Museum, Cave staged seven months of events throughout the city of Detroit anchored by his first solo exhibition at Cranbrook Art Museum. Cave is a 1989 graduate of Cranbrook Academy of Art. Cave has said that the time he spent in Detroit was critical to his growth as an artist. He returned to capture the positive energy currently enveloping the city. “Detroit continues to be an always-surprising environment of creativity, excitement, and engagement,” says Cave. In Detroit, he launched his largest performance series ever. His Soundsuits invaded the city for a series of photo shoots; he staged Dance Labs in partnership with the Museum of Contemporary Art Detroit (MOCAD); he worked with LBGTQ youth and young adults from the Ruth Ellis Center to create Up Right: Detroit, a performance filmed in the city; and he engaged students from the Detroit School of Arts and the Detroit RiverFront Conservancy to produce Heard•Detroit, a procession of 30 life-size horse sculptures operated by 60 high school dancers who will paraded and performed along Detroit’s riverfront. Cave’s project culminated at the end of the exhibition in October, when the artist staged Figure This: Detroit, a massive public performance at Detroit’s Masonic Temple.

Cranbrook Art Museum served as the producer for the entire Nick Cave project, and was home to the exhibition Nick Cave: Here Hear, that included a 7,000-square-foot exhibition of Soundsuits, recent sculptures, and newly commissioned artworks. The exhibition was on view from June 20 through October 11, 2015. A full weekend of celebrations occurred for the exhibition opening, including a film screening and block party performances in Detroit’s Brightmoor community on June 21. Nick Cave: Here Hear is curated by Laura Mott, Curator of Contemporary Art and Design at Cranbrook Art Museum.

Various Locations
April and May 2015

Soundsuit Invasion Photo Shoots featured the artist Nick Cave being photographed in Soundsuits at iconic Detroit locations. The photographs were published as a book titled Nick Cave: Greetings From Detroit—inspired by vintage postcards—depicting the city of Detroit from the perspective of creative positivity. The book was designed by Bob Faust, photographed by Corine Vermeulen with an essay by Laura Mott.

The Redford Theatre and The Artist Village
Detroit, MI
June 21, 2015

The day after Nick Cave: Here Hear opened to the public at Cranbrook Art Museum, a celebration was held in Detroit to kick-off this ambitious project. There was a screening of Nick Cave’s video work at the historic Redford Theatre. The screening was followed by a celebration at The Artist Village Detroit – filled with food, music, and dancers in Soundsuits, who joined the party in an impromptu flash-mob. The event is a collaborative effort with the Sidewalk Festival of Performing Arts and engaged the Brightmoor, Old Redford and Northwest Detroit communities.

Performances by dancers in soundsuits occured throughout the afternoon. Free and open to the public.

Nick Cave is a prolific artist and dancer, famous for his sculptures called Soundsuits, which he often stages in public spectacle. The artist conceives some as fragile sculptural totems, and others as wearable performance suits designed for sound, mobility, and dance. Though influenced by a vibrant palette of African art, armor, found objects, fashion, and textile design, the origin of the Soundsuit is rooted in social critique. Cave first created a suit in the aftermath of the Rodney King beating in 1991, envisioning an emotional shield that protected one’s race or gender while still expressing individuality. As Cave’s artwork began to resonate with vast audiences, the artist saw the Soundsuits as powerful agents to capture the public imagination on a monumental scale. Cave’s artistic practice now advocates the vital importance of collective dreaming, which he actualizes through large-scale performances.

Here Hear includes a collection of approximately thirty sculptural Soundsuits in the main gallery arranged in a dynamic vignette. It also includes a room of seven newly commissioned artworks surrounded by a new site-specific wall-based tapestry inspired by Cave’s childhood watching the night sky. An additional gallery will feature a selection of his recent sculpture work and a separate area will display the artist’s video work. Finally, the “Map in Action” room will serve as a hub for the Detroit Performance Series and display the wearable Soundsuits that will come and go to performances throughout the city of Detroit. Video footage of the performances will be added to the room throughout the duration of the show, thereby becoming a living document of the entire project.

Rehearsals at MOCAD and final performances in Detroit.
July 13 to August 1, 2015

Cranbrook Art Museum partnered with the Museum of Contemporary Art Detroit (MOCAD) to present three Dance Labs designed by Nick Cave. He paired three local dance companies with three musicians to create their own choreographed works with his extraordinary sculptures. The rehearsals at MOCAD were open to viewers, and the three public performances were staged in locations throughout the city.

Dance Lab rehearsals took place at the Museum of Contemporary Art Detroit and were open to viewing by the public.

Up Right: Detroit is a short feature film conceived by Nick Cave as an “act of initiation” and a preparation of the mind, body, spirit, and selfhood of a group of young adults from the Ruth Ellis Center. The participants undergo a ritual of being costumed in elaborate soundsuits and enter the city, transformed. Filmed at the historic Michigan Theatre.

The evening included an opening reception with Cave, the film premiere, and a Q&A with Nick Cave and Curator Laura Mott following the film.

As a continuation of his performance series, Cranbrook Art Museum presented Nick Cave’s Heard•Detroit on Saturday, September 26 at Milliken State Park in Detroit.

Working in partnership with the Detroit RiverFront Conservancy and the Michigan DNR Outdoor Adventure Center, the project featured 30 life-size horse sculptures performing along the Detroit riverfront. The sculptures were operated by 60 dancers from the Detroit School of Arts and the Maggie Allesee Department of Theater and Dance at Wayne State University. According to Cave, the project was intended to be “a dreamlike vision that stops everyday life for a collective transformative moment.”

Drawing inspiration from Cave’s Soundsuits, Cranbrook Art Museum has created educational programs for teachers, school groups, and individual students. Teachers will have access to a free, interdisciplinary curriculum featuring videos of Nick Cave discussing his art, the creative process, and identity of self and place: Nick Cave: Exploring Identity through the Arts. School groups can attend The Costume Cave Workshop, creating their own costume pieces. Individual students can register for Nick Cave inspired Summer Programs. As part of the education series, selected classes will be invited to participate in Nick Cave’s Figure This: Detroit and perform live!

The project culminated with Figure This: Detroit, a large-scale performance comprised of the dances and music from the Dance Labs and a presentation by children of their Cave-inspired creations. This final performance was a free event in Detroit’s Masonic Temple for an audience of hundreds.

Figure This: Detroit also included the premiere of two films by The Right Brothers: “Up Right: Detroit” and a special recording of “Heard•Detroit.”

This project has attracted a wide variety of sponsors and community partners who are eager to share Cranbrook Art Museum’s vision of spreading creative positivity throughout Detroit. The Presenting Sponsors are the Ford Foundation and the John S. and James L. Knight Foundation and their Knight Arts Challenge Detroit project, which looks to fund ideas that engage and enrich Detroit through the arts. Cranbrook Art Museum received a Knight Arts Challenge Detroit matching grant of $150,000 to kick-off this ambitious project. Leadership Sponsors include Quicken Loans with their Opportunity Detroit mission and The Kresge Foundation. The project’s Major Sponsor is The Taubman Foundation. Supporting Sponsors include Strategic Staffing Solutions, the Michigan Council for Arts and Cultural Affairs and the National Endowment for the Arts, the Masco Corporation Foundation, Maggie and Bob Allesee, and the Jack Shainman Gallery. Community Partners include the Detroit RiverFront Conservancy, the Ruth Ellis Center, the Detroit School of Arts, the Museum of Contemporary Art Detroit (MOCAD), the Sidewalk Festival of Performing Arts, and Detroit Public Television. 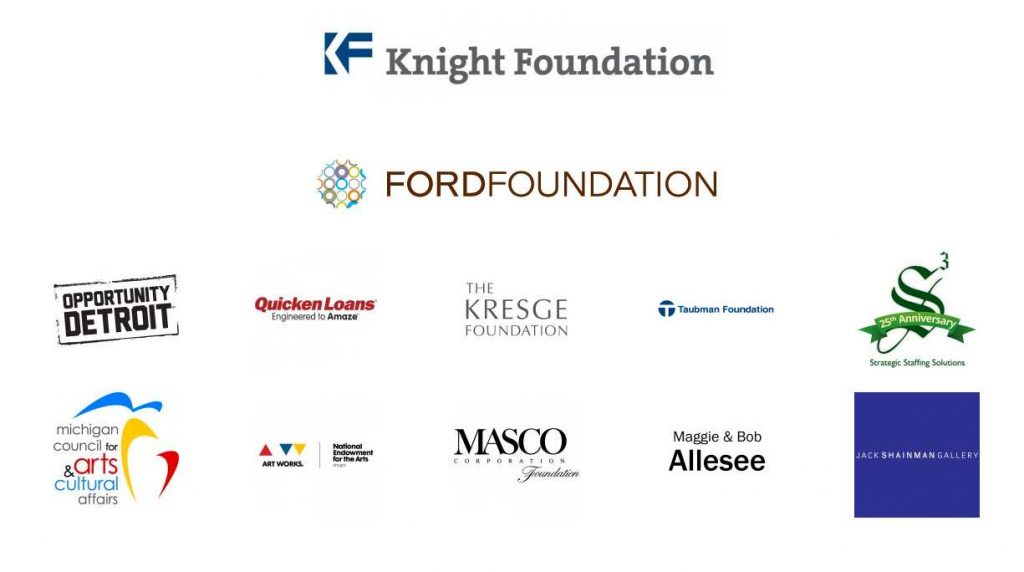