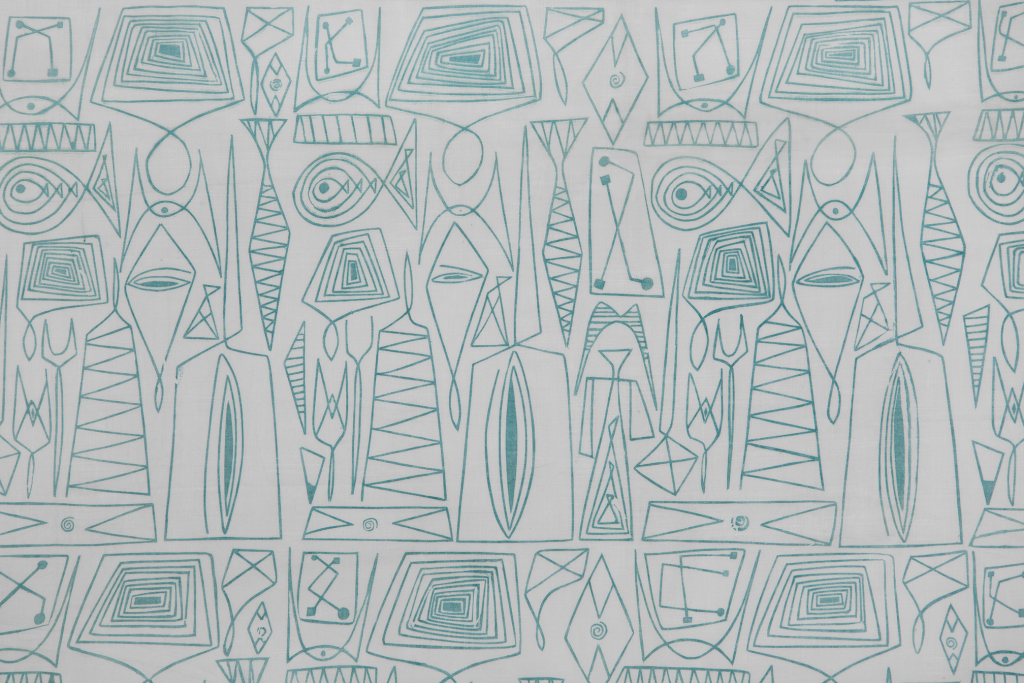 This retrospective exhibition of the work of textile and interior designer Ruth Adler Schnee (b. 1923), still in active practice at age 96, affirms her pivotal role in the development of the modern interior. The exhibition presents at its core the body of textile patterns that Adler Schnee has created over the course of her prolific seven-decade career, including the screen-printed fabrics that helped define mid-century American modernism as well as their later translation into woven textiles. These designs become the filament that weaves throughout Adler Schnee’s professional networks, crossing between her and her husband’s retail entrepreneurship and her interior design commissions and architectural collaborations.

Born to a German Jewish family in Frankfurt, Germany, her mother’s Bauhaus training and creative circle of friends developed Adler Schnee’s interest in vibrant use of colors, rich textures, modern form, and the thoughtful study of architectural space from an early age. Following the Nazis’ Kristallnacht pogrom of 1938, the Adler family fled to the United States and settled in Detroit. First studying fashion design at Cass Technical High School and interior architecture at the Rhode Island School of Design, Adler Schnee received an MFA in Design from Cranbrook Academy of Art in 1946, becoming one of the first women to receive this degree. She went on to found a design consulting firm and modern design shop in Detroit with her husband Edward Schnee, launching a business which brought good design into important modern homes for over half a century.

Vintage textiles, archival drawings, and photography, and assorted ephemera, as well as her ongoing textile collaborations with companies such as Anzea Textiles and KnollTextiles, come together in an architectonic display to illuminate the underrepresented narrative of how women shaped the direction and reception of modernism in postwar America. The exhibition reveals her rigorous, iterative design processes and presents the more ephemeral residential and commercial interior design projects alongside the material through-line of her textiles.

Ruth Adler Schnee is organized by Cranbrook Art Museum and curated by Ian Gabriel Wilson, the Jeanne and Ralph Graham Collections Fellow. The exhibition is made possible with support from the Clannad Foundation and the Maxine and Stuart Frankel Foundation.

Cranbrook in 1946 was an enchanted place! A liberal European background and Beaux Arts training at the Rhode Island School of Design during wartime, hardly prepared me for it.

Harry Bertoia, Charles Eames, Ray Kaiser (later Eames), Florence Schust (later Knoll), and Harry Weese were no longer the all-star cast. But their spirit of experimental design, so enthusiastically fostered and promoted by the Saarinens, was still all-pervasive.

Ideas of using organic forms in design, coupled with new and untried materials in ingenious and revolutionary methods, were difficult to absorb. It took two months of the precious nine months of my fellowship period to make the personal adjustment. I deplored this loss of time. But once I realized that the “world was my oyster”: that there were no limitations except those posed by myself, I produced.

It was the most exhilarating experience to watch my work unfold from day to day.

Evenings at Saarinen House are long remembered. Discussion on design and creative processes were always the topic. Loja would be ensconced on a hard bench, cushioned by only one of her tapestries draped from the ceiling, across the bench and to the floor. Eliel sat on a stiff ceremonial chair of his own design. He was exceedingly comfortable there, so he always said. We students lounged at their feet.

There, I learned design discipline. I learned the philosophy which governs my entire life. In Eliel’s words, “Art and Design cannot be taught; it must be learned”.

Little did I realize then that the training and thoughts first formed at Cranbrook would make my life so very difficult, but so rewarding. They set standards by which I judge my work. And, to the frequent dismay of my husband and children, they often become the system of rules governing conduct. But they also serve to develop success.

I am a diligent designer. I love my craft and work hard at it, often late into the night. I am meticulous, making hundreds of sketches. I am proud of my design process. Saarinen and Cranbrook taught me so.

As I look back on thirty-five years of great pleasure and great agony in my chosen profession, I know that Saarinen and Cranbrook opened the doors to my lonely world. But it is a world so full of dynamism and exploded color that I hope to spend the rest of my life giving new direction to

Established concepts. Saarinen and Cranbrook taught me so.