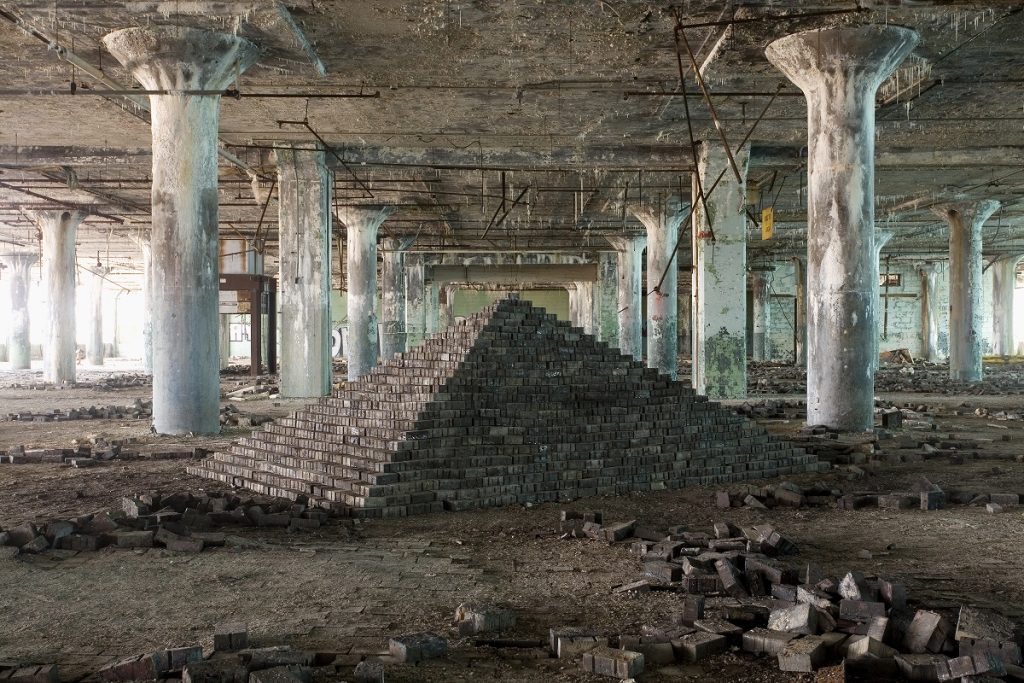 Scott Hocking: Detroit Stories is the first museum retrospective of the artist, who has been living and working in Detroit for more than twenty-five years and who was born in the adjacent community of Redford Township, Michigan.

Hocking’s acclaimed work spans sculpture and installation, photography and video, and is known for its repurposing of existing materials and found objects, which the artist uses in site-specific projects that delve into local histories and conditions of place. Hocking gained international attention for a series of works undertaken in various abandoned buildings around Detroit, where he would assemble large-scale sculptures from the surrounding detritus: a giant egg-shaped sculpture made from stacking hundreds of pieces of slab marble found at Michigan Central Station (2007–2013), or a giant ziggurat structure composed of thousands of wooden floor blocks at the Fisher Body Plant 21 (2007–2009). Produced through the artist’s lone labor over the course of many months and years, these powerful works are mostly known through the spectacular photographs that Hocking takes to document the final result. In addition to these monumentally scaled works, Hocking has also created public art projects such as Nike of the Strait (2021), a winged tower made from repurposed metal buoys, located along the Detroit Riverfront. Hocking documents the unique contexts and quirky nature of Detroit’s ever-changing urban landscape in, for instance, the hauntingly beautiful on-going series, Detroit Nights (2007– present), which depicts city scenes and landscapes photographed using only available light.

Emerging in the 2000s to become one of Detroit’s most important contemporary voices and chroniclers, Hocking possesses an embodied knowledge of the city and its idiosyncratic histories. While rooted in the city of Detroit, Hocking has also produced projects in different places around the world, responding to the particular circumstances of each location. His unique artistic process combines aspects of urban archeology— uncovering layers of history, meaning, and memory—with a historian’s sense of discovery and a writer’s craft of storytelling.

The exhibition will include pieces from Hocking’s major bodies of work, including his site-specific installations, large-scale sculptures, found object assemblages, photographic series, and videos of his journeys. Also known for his writings, Hocking will punctuate the galleries with some of his stories—tales of (mis)adventure, episodes from history, reflections of a changing city, ruminations on art and life, and more—offering a narrated tour for visitors on their own journey through the exhibition.