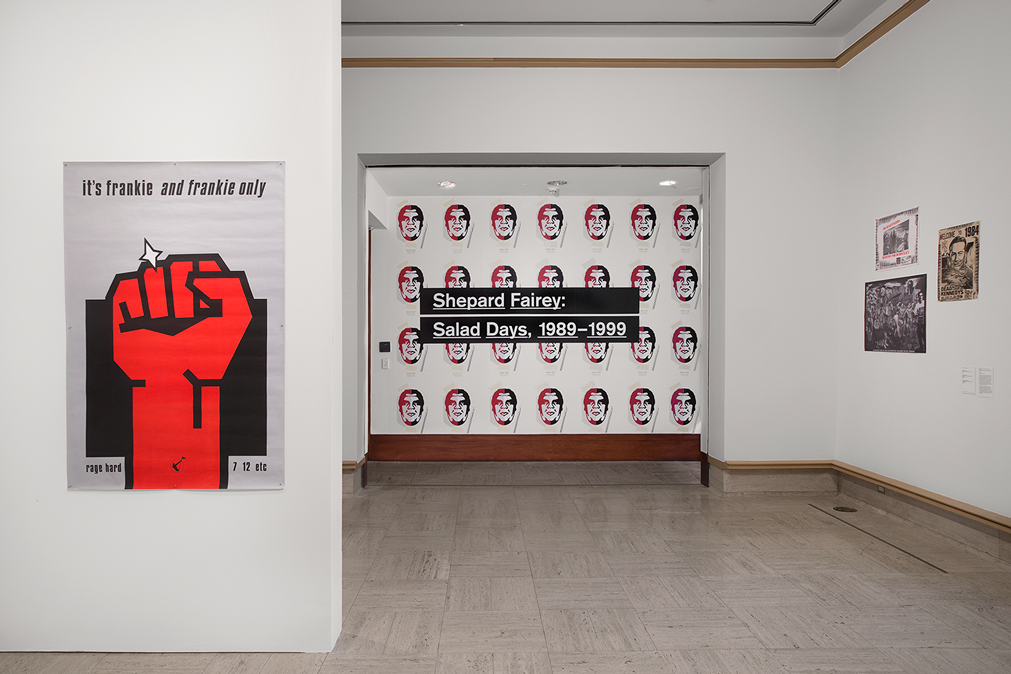 To view all of our exhibitions for free, purchase a museum membership!

Shepard Fairey: Salad Days, 1989-1999, considers the first 10 years of Fairey’s artistic practice, and its roots in the graphic language and philosophies of the punk scene. Punk’s ethos played a decisive role in the artist’s early work. “When I discovered punk rock, and realized that music could have an attitude in its style but a specific point of view in its lyrics,” states Fairey, “I became even more interested in how it works as a way of shaping attitudes and culture.”

From 1989 to 1999, the artist adopted many of punk’s biting and playful graphic strategies, as well as its low-tech methods of production and distribution. Fairey created his first Andre the Giant has a Possesticker in a spontaneous DIY manner, appropriating an image of professional wrestler André René Roussimoff (aka André the Giant) from a newspaper. The image would gain iconic status when it spread via friends and fans to city streets across the United States and eventually around the world. The Andre the Giant campaign and image would transform in the mid-1990s into the Obey Giant series, which was inspired by John Carpenter’s sci-fi horror film, They Live (1988) and its plot about subliminal messages implanted in a society in order to control its inhabitants. Taking inspiration from early Russian Constructivist poster designs in particular and from revolutionary propaganda posters in general, Obey Giant prints were posted unsolicited on billboards, buildings, and other parts of the city.

“In Fairey’s earliest works we can see the inheritance of the punk ethos: the satirical impulse, the guerilla-style poster sniping, the oblique references to pop culture, and the very public stage of the street as a place for unapologetic individual expression,” states Blauvelt, Director of the Cranbrook Art Museum. He continues, “Shepard Fairey is a perfect bridge to connect the history of punk graphics that we are also exhibiting at the same time to his seminal work from the 1990s.”

Shepard Fairey: Salad Days, 1989-1999 showcases the artist’s formative years through a variety of posters, stickers, and archival documents showing his engagement with punk. It will also feature a new installation in Cranbrook Art Museum’s galleries created by the artist. ​

The exhibition is organized by Cranbrook Art Museum and curated by Andrew Blauvelt, Director, and Steffi Duarte, Jeanne and Ralph Graham Collections Fellow, with assistance from Library Street Collective. Cranbrook Art Museum programs are made possible with generous support from the Maxine and Stuart Frankel Foundation, members of the Art Museum Committee, and ArtMembers at Cranbrook.