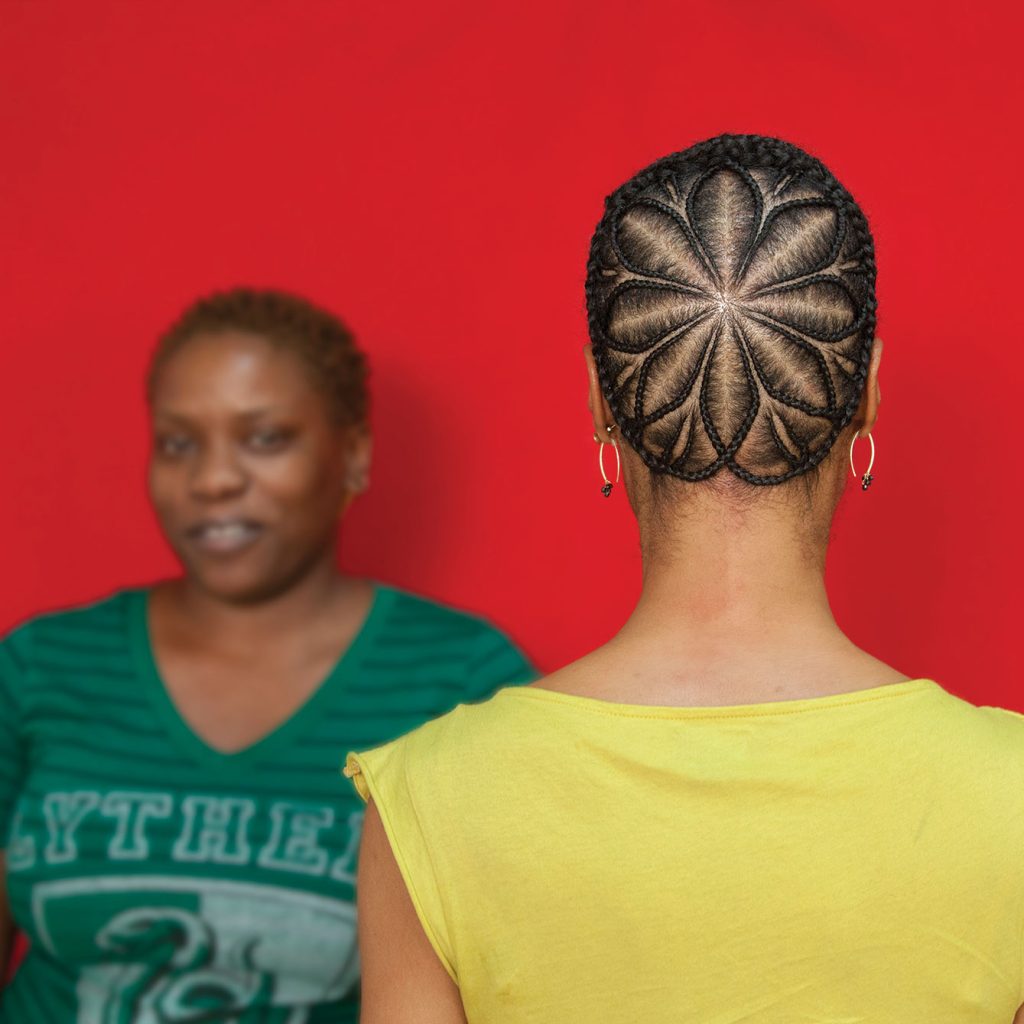 Sonya Clark: We Are Each Other

Sonya Clark: We Are Each Other is a mid-career survey of the artist’s work with a focus on her community-centered and participatory projects. Over her twenty-five-year career, Clark has been committed to issues of history, race, and reconciliation. Clark often undertakes this exploration through everyday fiber materials—hair, flags, found fabric—and craft practices. In Clark’s work, craft and community are intertwined, and the resulting projects facilitate new collective encounters across racial, gender, and socioeconomic divisions. The ethos of her participatory work is embedded in the title We Are Each Other. It is inspired by the poem about civil rights activist Paul Robeson (1971) by Gwendolyn Brooks, which ends with the phrase: “we are each other’s harvest: we are each other’s business: we are each other’s magnitude and bond.”

In the Hair Craft Project, for example, Clark collaborated with hairstylists to use the hair on her own head as a canvas to highlight their skills, carefully documenting each creation over the course of a year. In works such as the Kente Flag Project, Unraveling, and Monumental Cloth, The Flag We Should Know Clark explores the varied and often conflicted social and cultural histories that flags can represent. In other projects such as Beaded Prayers, which formed the basis of Clark’s Healing Memorial project in Detroit for losses suffered during the COVID-19 pandemic, or Finding Freedom, a meditation on the plight of individuals fleeing slavery along the Underground Railroad, contributions made by numerous participants form the artwork itself.

Clark received her MFA in Fiber from Cranbrook Academy of Art in 1995 and has since achieved acclaim for her innovative practice. Her work has been exhibited in more than 350 museums and galleries in the Americas, Africa, Asia, Europe, and Australia. Clark is the recipient of a United States Artists Fellowship, a Pollock Krasner Award, an 1858 Prize, an Art Prize Grand Jurors Award, and an Anonymous Was a Woman Award. Clark is a Professor of Art at Amherst College in Massachusetts and previously served as Chair of the Craft/Material Studies Department at Virginia Commonwealth University in Richmond.

The exhibition is a three-institution partnership between Cranbrook Art Museum in Metro Detroit, the High Museum of Art in Atlanta, and the Museum of Arts and Design in New York City. The collaboration is rooted in both audience and context as all three cities have substantial populations of residents with a lineage to the African diaspora, and each institution has a dedicated mission to contemporary art and craft traditions.

Sonya Clark: We Are Each Other is co-curated by Laura Mott, Chief Curator at Cranbrook Art Museum; Elissa Auther, Deputy Director of Curatorial Affairs and William and Mildred Lasdon Chief Curator at The Museum of Art and Design; and Monica Obniski, Curator of Decorative Arts and Design at the High Museum.

The Cranbrook Art Museum presentation is supported by the Gilbert Family Foundation, the NATIONAL ENDOWMENT FOR THE ARTS, the Michigan Arts and Culture Council, the Ellsworth Kelly Foundation and the Foundation for Contemporary Arts, and the Art Dealers Association of America Foundation.